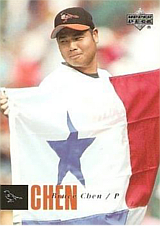 Bruce Chen pitched seventeen seasons in the big leagues, finally finding stability with the Kansas City Royals amid a stretch of three double-digit victory seasons in his 30s.

Chen signed at 16 out of Panama with the Atlanta Braves, debuting with a 1-4 record but 3.80 ERA and 3 walks to 26 strikeouts with the GCL Braves in 1994. In 1997, he began ratcheting his way up the Baseball America prospect lists, after posting a 12-7 record with 182 strikeouts in 146 innings with the Macon Braves to lead the South Atlantic League in strikeouts. Ranked at 27 on BA's list entering 1998, he promptly earned Southern League Pitcher of the Year honors with a 13-7 record, 3.29 ERA and 164 strikeouts for the Greenville Braves. After fanning 29 men in 4 starts with the Richmond Braves in 1998, he got the call to The Show in September, earning his first win on September 12th. Entering the 1999 season, now the 4th best prospect in all of baseball per BA, he was solid again at Richmond but struggled in his first extended big league look, going 2-2 with a 5.47 ERA in 16 games (7 starts) with Atlanta.

Despite electric stuff and occasional incredible outings, Bruce just simply was not able to put it together for any stretch in the 2000s. The Braves initially deployed him as a reliever in 2000 to solid results, then flipped him to obtain the immortal Andy Ashby at mid-season. Bruce made 31 starts for the Philadelphia Phillies over the next year, spread over two seasons, with a group of fans coming out calling themselves the "The Chen Pen". At the trading deadline in 2011, with a 4-5, 5.00 record, he was on the move again, this time to the New York Mets, with whom he pitched adequately. On September 21st, Bruce took the ball at Shea Stadium in the first game played in New York City since the September 11 attacks, pitching 7 innings of one-run ball to keep the Mets in it for Mike Piazza to blast a home run in the 8th for a 3-2 win. Bruce then only made 3 more appearances with the Mets, the last in April 2002, before being flipped to the Montreal Expos as part of a multi-player deal. His stint in the great white north lasted all of 15 games (2-3, 6.99) before being dealt to the Cincinnati Reds for journeyman Jim Brower, finishing the year as a middle reliever. Early in spring training 2003, he was released, moseying to the Houston Astros (12 innings, 6.00 ERA) and the Boston Red Sox (5 games, 5.55 ERA), finishing the season as a member of the Pawtucket Red Sox.

In 2004, Bruce signed with the Toronto Blue Jays, making 3 frightful starts (0-3, 8.71) with the Syracuse SkyChiefs of the notoriously pitcher-friendly International League. He was essentially given away to the Baltimore Orioles for a giant pile of nothing in May and settled down (4-3, 3.22, 108 strikeouts in 22 games) to return to the majors for 8 games (2-1, 3.02). In 2005, he was given a chance in the rotation based on his late-season look the year before. He responded with perhaps his best big league season, going 13-10 with a 3.83 ERA and 133 strikeouts in 34 games (32 starts) and 197 innings. Counted on for the first time in a while as a piece, Bruce responded with an absolutely dreadful season in 2006, and was eventually banished to the bullpen with an 0-7, 6.93 record in 40 games. It was time to bounce around again. The Texas Rangers gave him a shot and he pitched nine times, four times in Triple A and five times out of the bullpen with a 7.20 ERA in 2007. He was released at season's end and missed the entirety of 2008.

Chen did not resurface until he started one of Panama's two games in the 2009 World Baseball Classic (having pitched for them in the 2006 iteration as well) and held Puerto Rico to 2 runs in 4 innings, allowing solo homers to Carlos Delgado and Ivan Rodriguez. Chen took the loss against Javier Vazquez. He joined the Kansas City Royals on March 1st and split the season between the Omaha Storm Chasers (4-2, 3.40 in 14 games) and the big club (1-6, 5.78 in 17 games). Then, in 2010, he got back into a winning groove, finishing the season 12-7 with a 4.17 ERA in 140 1/3 innings. Unlike the follow-up to his 2005 season, he once again put together a really good line in 2011. Bruce was the team's best pitcher in the latter year, finishing 12-8 with a 3.77 ERA in 155 innings. In the former year, he earned the catch-phrase "C'mon Chen!" after being heckled from the stands by Will Ferrell and Jason Sudeikis. Sudeikis, a diehard Royals fan, had invited Ferrell and several other comedians to the game and were seated in the on-field dugout suite.

Convinced Chen had finally turned a corner, the Royals gave him a big raise to re-sign for two years prior to 2012. He slipped a little, leading the AL with 34 starts and a career best 140 strikeouts in 191 2/3 innings, but with an 11-14 record and 5.07 ERA. The Royals suddenly looked like a team that could compete in 2013 and Bruce moved to a swingman role, going 9-4, 3.27 in 34 games, including 15 starts, with 121 innings and an ERA+ of 126. The Royals finally made it back to the postseason in 2014 - going all the way to the 7th game of the World Series, but Chen was no longer a key part of the team. He pitched only 13 times, making 7 starts and logging 48 1/3 innings with a 2-4 record and 7.45 ERA. He missed all of May and almost all of June on the disabled list, but pitched only sparingly and poorly in July and August and was released on September 5th, watching from home as the Royals almost won the World Series. It was a bittersweet end to a six-season stay with Kansas City. On February 17, 2015, Bruce signed a minor league deal with the Cleveland Indians. He debuted on May 9th after spending the first five weeks of the season in the minors. Dealing for his 11th team, he gave up 6 runs in 4 innings against the Minnesota Twins, earning a 7-4 loss. After another unsuccessful start on May 15th, in which he gave up 3 runs to the Texas Rangers in 2 1/3 innings, he was designated for assignment, sporting a 12.79 ERA. He announced two days later that he was retiring from baseball. He was the penultimate former member of the Montreal Expos to play in the majors; when he retired, only Bartolo Colon was still active.

Chen is the only major league player born in Panama who is of Asian ancestry. He expressed interest in playing for the Chinese national team in the 2013 World Baseball Classic (after Panama failed to qualify) and was put on their provisional roster, but the documentation he submitted was insufficient to prove his eligibility and he withdrew in mid-February. Still, he decided to put his name forward again for the 2017 World Baseball Classic, even though he had been retired for well over a year at that point. The bureaucratic issue that had prevented him four years earlier had now been solved, and he explained that he wanted to do this to honor his grandparents, who had emigrated from China to Panama. He faced the Cuban national team in his lone appearance and held them to no runs on 3 hits in 2 2/3 innings.