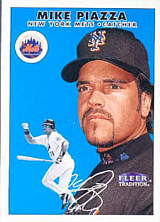 Inducted into Hall of Fame in 2016

Mike Piazza was arguably the best offensive catcher in baseball history. Ten times during his career he hit over .300. He was famously drafted in the 62nd round of baseball's 1988 Amateur Draft, as a favor to Piazza's father, who was a close friend to Los Angeles Dodgers manager Tommy Lasorda, both of whom were born in Norristown, Pennsylvania.

His accolades started in 1993 when he won the Rookie of the Year Award and started his reign as the most prolific hitting catcher in baseball by being voted into ten consecutive Silver Slugger Awards and twelve All-Star Games. He needed just 422 games to reach the career 100-homer mark in 1996, fewer than any other catcher before him (this was topped by Gary Sanchez, who did it in 355 games in 2019).

On May 14, 1998, Piazza was traded first to the Florida Marlins with future Met Todd Zeile for Gary Sheffield, Charles Johnson, Bobby Bonilla, Jim Eisenreich, and Manuel Barrios. Eight days later, Piazza was traded to the New York Mets in one of the most lopsided trades ever, for Preston Wilson, Ed Yarnall and a minor league player named Geoff Goetz. The trade instantly made the Mets into a contender with Al Leiter, Rick Reed, Edgardo Alfonzo, and John Olerud as key players alongside Piazza. In 1998, Piazza hit grand slams for both the Dodgers and Mets against the Diamondbacks; he became the second player with grand slams against one team for two different teams in a year, following Ray Boone by 45 years. Ike Davis joined the club 16 years later.

Piazza had a great deal of success against Roger Clemens. Many Mets fans believe Clemens intentionally beaned Piazza in the head in a 2000 interleague game between the Mets and the New York Yankees, leading to a significant amount of time on the disabled list for Piazza. Then, in the 1st inning of Game 2 of the 2000 World Series, Piazza hit a foul dribbler up the first base line off Clemens that broke his bat. The end of the bat rolled towards Clemens who picked it up and threw it toward Piazza, just missing his legs. Piazza asked Clemens, "What's your problem?" and did not rush the mound. The benches cleared, but Clemens was not ejected. Roger went on to pitch 8 innings of two-hit baseball and the Yankees won the game and eventually the series in five games.

Clemens and Piazza were teammates in the 2004 All-Star Game in which Clemens appeared as the starting pitcher. Clemens gave up five hits and six runs (three earned) in his only inning of work. Conspiracy theorists believe Piazza may have been tipping Clemens's pitches in retribution for past events.

Regarded strictly as an offensively-talented catcher, Piazza has been unfairly labeled as defensively challenged because of a poor throwing arm. However, Piazza was generally regarded among players, scouts and managers as calling a great game and among the best at blocking balls in the dirt. Piazza actually has a better lifetime CERA (catchers earned run average), 3.81, than renowned defensive catcher Mike Matheny (4.38). [1]

Piazza's Met tenure ended after 2005, and he signed a one-year deal with the San Diego Padres for 2006, with a mutual $8 millon option for the following season. He hit .283 with 22 home runs as the Padres' starting catcher that first season, leading them to the postseason. However, the team failed to pick up his option, and he signed a one-year contract with the Oakland Athletics in 2007. He started the season as the team's DH, with veteran Jason Kendall catching. He hit fairly well but went on the disabled list after two months, losing his position to minor league veteran Jack Cust, another player with defensive issues. He still played 83 games - none at catcher - with a .275 average and 8 home runs. The season was only good for a 96 OPS+, well below average for a DH. Piazza announced his retirement in May 2008 when he was unable to find an offer he wanted to accept.

As a sideline, he operates the Mike Piazza Honda dealership in Phoenixville, Pennsylvania. He appeared in Baywatch, Married with Children, the 2002 movie Two Weeks Notice and performed in at least one MTV Rock & Jock Softball Challenge. PIazza was the subject of a 2003 song by the group Belle & Sebastian, "Piazza, New York Catcher", off their Dear Catastrophe Waitress album.

His brother, Thomas Piazza, played several seasons in the minors. A cousin, Mike Piazza, pitched in the minor leagues from 2009 to 2014.

Piazza's name first appeared on the BBWAA ballot for the Hall of Fame in 2013. While under normal circumstances he would have been a shoo-in for election in his first or second year of eligibility, this was the infamous "steroid" ballot, tainted by the presence of a number of avowed or suspected PED users. Rightly or wrongly, Piazza's name was tainted by association in spite of allegations against him never having risen beyond the realm of vague rumors. As a result, he received 329 votes, or 57.8%, well below the required the 75%. However, that still placed him second among the first-year candidates, with a total that indicated he was not considered with the same animosity as confirmed users of PEDs. Historically, players who have cleared the 50% threshold in their first year of eligibility have all gained induction to the Hall through the BBWAA vote. In his second year of eligibility in 2014, he moved up to 62.2% in spite of a very strong ballot. With another strong ballot that saw four players elected in 2015, Piazza was the top vote-getter among those who failed to get in, at 69.9%, putting him in excellent position to cross the 75% threshold within a year or two. Indeed, in 2016, on his fourth try, he was voted in, being named on 365 of 440 ballots, giving him a percentage of 83%. He was inducted at a ceremony in Cooperstown, NY on July 24, 2016, alongside Ken Griffey, Jr. In an emotional speech, he thanked Italy and his father Vince for providing him with the values that guided his life, to make him the lowest-drafted player to ever make it to the pinnacle of the sport. Piazza was also inducted into the New York Mets Hall of Fame in 2013.

Following Piazza's induction in the Hall of Fame, the New York Mets retired his uniform number 31 on July 30, 2016. That same year, he became the principal owner of A.C. Reggiana 1919, a third-division Italian football (soccer) team based in Reggio Emilia, Emilia Romagna. He also continued to work for the Mets as a guest instructor in spring training and said that he had not ruled out becoming a baseball owner in the future, along the lines of the move his contemporary with the New York Yankees, Derek Jeter, had made.

Some or all content from this article is licensed under the GNU Free Documentation License. It uses material from the Wikipedia article "Mike Piazza".