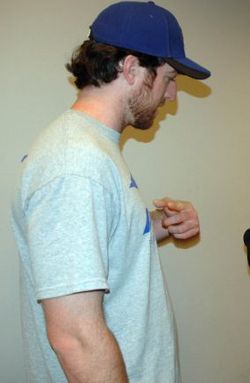 The son of Ron Davis, Ike Davis was a first-round pick in the 2008 amateur draft. He represented the US in international tournaments at the youth, college and senior level. He made his major league debut as a first baseman with the New York Mets in 2010.

As a youth, Davis was batboy for the Phoenix Firebirds. In his sophomore year in high school, he hit .559 while going 9-0 with 3 saves and a 1.58 ERA to win All-State honors and be named Arizona's Mr. Baseball. He was a star performer for the 2003 USA youth national team, hitting .464 with 7 doubles, 8 runs and 10 RBI in 28 at-bats to help lead them to a Gold Medal in the 2003 World Youth Championship. He led the team in doubles, was second in RBI and tied for 4th in runs. He was also 1-0 on the hill.

Davis was the first baseman for the USA in the 2004 World Junior Championship, hitting .316 with 6 RBI, second to Kyle Russell on the 4th-place squad; he had more RBI than Justin Upton, Buster Posey, Andrew McCutchen, Brandon Snyder or David Cooper, all future first-round picks. Ike also was the top USA hurler, going 1-0 and allowing 3 hits, no walks and no earned runs in six innings while striking out 10. He tied Sean O'Sullivan for the team lead in Ks.

He was drafted in the 19th round of the 2005 Amateur Draft by the Tampa Bay Devil Rays. Opting for college, Davis hit .329/.387/.542 with 65 RBI in 58 games as a freshman for Arizona State. He was just 2-3 with a 7.42 ERA on the mound. Ike was named Pac-10 Conference Freshman of the Year and set a school record for RBI by a freshman. He was second to Chris Minaker in the Conference in RBI. Davis was named a second-team Freshman All-American DH by Baseball America and made the Pac-10 All-Conference team. He also was named a freshman All-American by Collegiate Baseball. Ike spent the summer with the Anchorage Bucs; Baseball America rated him the Alaska Baseball League's #10 prospect.

Davis was then drafted in the 1st round of the 2008 amateur draft by the New York Mets, the 24th first-rounder in ASU history. He was signed by scout Mike Brown for $1.575 million and debuted with the Brooklyn Cyclones on June 26, going 1 for 4 with a double and a run against the Aberdeen Ironbirds. Davis hit .256/.326/.326 with no homers in an unimpressive debut season. Baseball America rated him the #17 prospect in the New York-Penn League, between Tim Fedroff and Chase d'Arnaud.

Davis hit .308/.419/.692 as a Team USA first baseman-right fielder in the 2009 Baseball World Cup, backing up Justin Smoak at first and Josh Kroeger in right and seeing increasing action as the Cup progressed and he performed well. He swatted three homers in eight games and finished 4th on the US in slugging behind Smoak, Jon Weber and Lucas May. He sat out the 10-5 Gold Medal game win over the Cuban national team, though, as the US went to Smoak and Kroeger at Davis's two positions.

Davis made an excellent impression in his first spring training with the Mets in 2010, almost making the team to begin the season, as a result of Carlos Delgado not having been re-signed over the winter. With Daniel Murphy injured, the Mets began the year with veterans Mike Jacobs, Fernando Tatis and Frank Catalanotto sharing the job at first base, while Davis went to AAA Buffalo where he hit .364 in 10 games. Meanwhile, the trio of veterans was not doing the job; on April 18, Jacobs was designated for assignment, and the next day Davis was called up and inserted into the starting line-up. He made his presence felt immediately, going 2 for 4 with an RBI in 6-1 win over the Chicago Cubs. He remained the starting first baseman for the rest of the year and showed some good power in his first season, belting 33 doubles and 19 homers in 147 games. His batting line of .264/.351/.440 was quite solid for a rookie with fairly limted professional experience.

He started off 2011 well, being the Mets' most consistent hitter over the first month-and-a-half of the season, with a batting line of .302/.383/.543 in 36 games, good for an OPS+ of 156. Unfortunately, though, he was injured in a collision with 3B David Wright when the two ran into each other while trying to catch an infield pop-up hit by Troy Tulowitzki of the Colorado Rockies on May 10th. Davis injured his ankle and was placed on the disabled list the next day, soon joined by Wright who had injured his back in a separate incident earlier in the season but had continued playing. His ankle injury did not heal well, and an MRI conducted a month later revealed that cartilage damage was still present. The Mets decided to extend his rest by another three weeks, hoping to avoid season-ending surgery, but in vain. He did not undergo surgery, but did not play again that year either. To make things worse, he contracted an infection of the lungs during the off-season that was likely a case of Valley Fever, a disease that can sap a player's strength for long periods. The Mets were treating the issue very carefully, aware that fellow player Conor Jackson had missed most of the 2009 season because of the disease, also contracted in Arizona where Davis lives in the off-season.

As a result of the injury issues, Davis started the 2012 season relatively slowly, only hitting 12 homers before the All-Star Game. However, he turned into one of the National League's best power hitter over the second half, reaching the 30-homer plateau for the first time with a two-homer game against the Pittsburgh Pirates on September 24th. In spite of his hitting resurgence, there were still some questions regarding his long-term future as a Met, as a number of stories critical of his lifestyle, and in particular his fondness for the Big Apple's night life, appeared in the media during the season. Also disappointing was a batting average hovering in the .220's. Indeed, questions were rekindled early in the 2013 season, as he started the year mired in a deep slump. After 44 games, he was hitting a terrible .148 with only 2 doubles, 4 homers and 9 RBI. Manager Terry Collins was being asked regularly by reporters how long he intended to stick with Davis in the line-up given his complete lack of production, but Collins refused to give up on his slugger. On May 26th, Davis rewarded his confidence with a rare clutch performance, hitting a two-run single against the Atlanta Braves with the bases loaded and the scored tied at two to give the Mets a 4-2 win that broke an eight-game losing streak at home. He went 2-for-3 with a walk that night, having entered the game in a 2-for-44 skid. However, he did not manage to turn things around permanently, and after going 0 for 3 on June 9th, he was sent down to the minor leagues, batting .161 with 66 strikeouts in 186 at-bats. He played 21 games with the Las Vegas 51s, hitting .293/.424/.667 with 7 homers and 21 runs and was back in New York in early July. He ended the year there with a .205/.326/.334 line for a 90 OPS+ in 103 games, 9 homers and 33 RBI.

In spite of his recent struggles, Davis made the Mets' roster at the start of 2014, although Lucas Duda was named the team's starting 1B in his place. Relegated to a pinch-hitting role, he made the best of it on April 5th by hitting a pinch walk-off grand slam against J.J. Hoover in the 9th inning to give the Mets a 6-3 win over the Cincinnati Reds. He was 5 for 24 after 12 games when the Mets shipped him off to the Pittsburgh Pirates on April 18th in return for minor league pitcher Zack Thornton and a player to be named later. He immediately paid dividends for the Pirates (who had needed a left-handed first baseman to pair with Gaby Sanchez after letting Garrett Jones go in the offseason and Travis Ishikawa not panning out), as he got two hits including a double and scored twice in his first game for his new team on April 19th, then on the 21st, he hit a 4th-inning grand slam off Mike Leake of the Cincinnati Reds. He was the first player to hit grand slams for two different teams in the month of April. He was also the third player to hit grand slams for different teams against the same opponent in a year; Ray Boone did it in 1953 and Mike Piazza in 1998. He ended up playing 131 games for the Pirates as their regular first baseman, hitting .235 with 10 homers and 46 RBIs; he did not play in the postseason as Sanchez got the start against left-hander Madison Bumgarner of the San Francisco Giants in the Wild Card Game. On November 20th, the Pirates decided to have him designated for assignment, as plans were now to move 3B Pedro Alvarez across the infield to man the first base bag the following season; three days later, he was traded to the Oakland Athletics in return for a bonus slot for international signings.

Ike went back to the mound for the first time since college when the A's suffered a 14-1 beatdown at the hands of the Los Angeles Angels of Anaheim on April 21, 2015­, pitching a perfect 8th inning of mop-up relief. All three batters he faced, Collin Cowgill, C.J. Cron and Chris Iannetta, grounded out. He made another relief appearance on August 16th, in an 18-2 loss to the Baltimore Orioles. This time, he retired 3 of the 5 batters he faced, the only exceptions being Jimmy Paredes who doubled, and P Jason Garcia, who drew a walk; Garcia was batting because DH Steve Clevenger had moved to a defensive position earlier in the game, and was making the first plate appearance of his professional career. He played 74 games for the A's and hit .229, but with only 3 homers and 20 RBIs. While he had been a valuable player in spite of low averages in other years, this time the lack of power was a major drawback, as his OPS+ fell all the way to 79.

He became a free agent after the season and on February 15, 2016 signed a minor league deal with the Texas Rangers. he was assigned to the AAA Round Rock Express, where he hit .268 with 12 doubles, 4 homers and 25 RBIs in 39 games. The Rangers released him on June 12th so he could sign with the New York Yankees, who were desperate for a healthy body to play first base with Mark Teixeira, Greg Bird, Dustin Ackley and Chris Parmelee all hurt. He played 8 games, going 3 for 14, then was designated for assignment when Teixeira was activated on June 25th. He accepted to be outrighted to the AAA Scranton/Wilkes-Barre RailRiders. He hit .217/.318/.391 in 26 games for the RailRiders.

Davis then was the primary DH for the Israeli national team (his mother is Jewish, rendering him eligible under the tournament rules) for the 2017 World Baseball Classic Qualifiers (Nate Freiman was the 1B). He was 1 for 7 with two walks and one RBI, but Israel won a spot in the 2017 World Baseball Classic, their first World Baseball Classic. His lone hit came in the opening win over Great Britain, singling off Nolan Bond to score Zach Borenstein to give Israel a 4-2 lead in the bottom of the 7th. He played for Israel in the 2017 Classic as well. During the 2017 season, he played for the Oklahoma City Dodgers of the PCL. Given his limited chance of ever making it back to the majors as a first baseman, except for short stints in case of injuries, the Dodgers began toying with turning him back into a pitcher, as he had been a two-way player until college and still had an above-average left arm. In August, they sent him to the AZL Dodgers to begin his conversion to the mound.