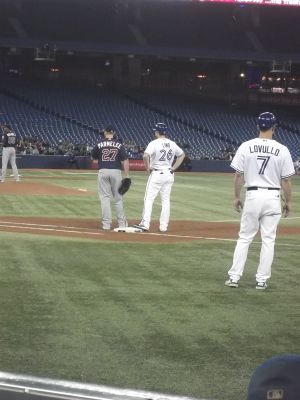 Chris Parmelee plays first base as Adam Lind watches for the next pitch, October 1st, 2012 in Toronto

Outfielder Chris Parmelee was selected by the Minnesota Twins in the first round of the 2006 amateur draft, with the 20th pick overall. He was signed by scout John Leavitt and made his pro debut that year with the GCL Twins, hitting .279 with 8 homers and 32 RBIs in 45 games, before being promoted to the Beloit Snappers, where he hit .227 in 11 games.

He reached the major leagues with the Twins at the end of the 2011 season, hitting .355 in 21 games after playing the year in AA. He then spent the next three seasons, 2012 to 2014 shuffling between the Twins and the AAA Rochester Red Wings. He split his time in the major leagues between the outfield and first base, but was not able to hit well enough to earn a regular job. His batting average was .229 and .228 the first two years, before rising to .256 in 2014. He never hit more than 8 homers or drove in more than 28 runs in his three seasons in Minnesota, with his OPS+ hovering between 83 and 94.

On June 16, 2015, Parmelee was called up from the minor leagues by the Baltimore Orioles and had a career game in his first outing for his new team. He homered twice among his four hits, scored 3 runs and added 2 RBIs in a 19-3 demolition of the Philadelphia Phillies. The Orioles had signed him as a free agent the previous January and he had started the season in AAA with the Norfolk Tides, where he was hitting .312 with 6 homers and 32 RBIs in 61 games at the time of his call-up. He then added another home run the next day in a 6-4 win over the Phillies. He played 32 games for Baltimore, hitting .216 with 4 homers and 9 RBIs, as his bat cooled down quickly after his first couple of games. He then signed with the New York Yankees for 2016 and was assigned to the Scranton/Wilkes-Barre RailRiders. He was hitting .252 with 7 homers and 21 RBIs in 43 games when the Yankees suffered a rash of injuries to their first basemen, prompting a call-up to the Big Apple on June 4th. Once again, he got off to a hot start, going 4 for 8 with a double and a pair of homers in his first 6 games, but he too went on the disabled list, victim of a strained hamstring. He was back in the minors by season's end. In the Triple-A National Championship, he hit a three-run bomb off Walker Lockett in the 1st inning in a 3-1 win; he was named the game's MVP.