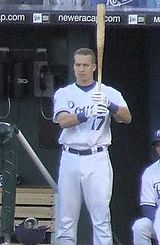 Mike Jacobs was drafted by the New York Mets in the 38th round of the 1999 amateur draft. He was signed by scout Bob Minor and made his pro debut that summer. He set a major league record in his first week in the major leagues with the Mets in 2005. He hit a three-run pinch homer off Esteban Loaiza of the Washington Nationals in his first major league at-bat on August 21st, then after going 0-for-4 in his second game, hit another homer on August 23rd, this time off Claudio Vargas of the Arizona Diamondbacks. What put him in the record book was his fourth game, against the D-Backs again on August 24th; he hit two more long balls that day, in addition to a double, making him the only player in history to homer four times in his first four games. His power never let down during the remainder of the season, as he finished the year with 7 doubles and 11 homers in only 30 games, giving him a batting line of .310/.375/.710 and a stratospheric OPS+ of 180.

Jacobs was part of the Florida Marlins infield in 2008 that included four 25+ home run hitters, a first in major league history. He teamed with 2B Dan Uggla, SS Hanley Ramírez and 3B Jorge Cantú. After the season, on October 30th, he was traded to the Kansas City Royals for reliever Leo Nunez.

On August 18, 2011, while playing for the Colorado Springs Sky Sox in the Colorado Rockies organization, Jacobs became the first North American athlete to be suspended for testing positive for human growth hormone, using a newly developed test for the once undetectable PED. He was hitting .293 with 23 homers and 93 RBI at the time, but received a 50-game suspension and the Rockies immediately released him. While it looked at the time that his mistake was career-ending, he signed with the Arizona Diamondbacks for 2012 and had a very solid season with the AAA Reno Aces, hitting .279 with 18 homers and 60 RBI in 101 games. The D-Backs rewarded him with a late-season call-up.

Jacobs became a manager with the Batavia Muckdogs in 2017 and moved up to the Clinton LumberKings in 2019. He was scheduled to manage the Jupiter Hammerheads in 2020 before the season was cancelled due to COVID-19, then managed the Beloit Snappers in 2021. Jacobs moved to the Cincinnati Reds' organization as "game planning coach" for the Louisville Bats in 2022.