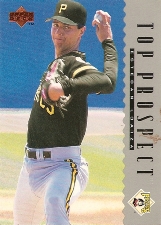 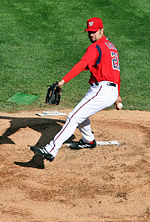 Esteban Loaiza pitched 14 seasons in the major leagues. Most years Loaiza would end up with a modest ERA and he bounced from team to team, always useful but never dominant. The exception was in 2003, when, pitching for the Chicago White Sox his 2.90 ERA was third in the American League, he won over 20 games, led the league in strikeouts, started the 2003 All-Star Game and was second in the Cy Young Award voting. Outside of this career year, his highest seasonal win total was 12, with the Washington Nationals in 2005. This low win total was despite the fact he remained a regular member of starting rotations for most of his career, six times starting 30+ games in a season. Loaiza pitched for numerous decent teams, reaching the postseason on three different occasions.

The younger brother of Sabino Loaiza, Loaiza was last seen pitching in the 2013 Mexican League.

On February 12, 2018, news emerged that Loaiza had been arrested three days earlier in San Diego, CA on felony drug charges, including possession of approximately 44 pounds of a substance likely to be cocaine. He was arrested at the wheel of a vehicle for what police described as a minor traffic infraction. The police added however that the case was linked to a wider narcotics investigation. An examination of the vehicle revealed a sophisticated hidden compartment presumably designed for contraband purposes. A search of Loaiza's home in Imperial Beach, CA led to the discovery of the drugs and he was facing felony charges of possessing and transporting a controlled substance with the intent to sell. He appeared at San Diego County Superior Court on February 14th, where he pleaded not guilty to the charges and was released after posting a $250,000 bail. A month later, his case was moved to federal court. He reversed course and decided to plead guilty on August 10th and now faced a sentence of 10 years to life. On March 8, 2019, he was sentenced to three years in jail.

He was married for a time to Mexican-American singer Jenni Rivera but filed for divorce in 2012, shortly before her untimely death in a plane crash.