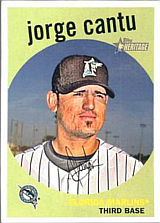 Jorge Cantú did much of his damage with Florida's big league teams in an eight year big league career.

The Florida Marlins, always looking for good buy-low options, lured Jorge into the fold to play third base for the 2008 season. It seemed like old times as his bat was invigorated once again, hitting .277/.327/.481 in 155 games with a career high 29 home runs, 95 RBI and a career best 92 runs scored. When he hit his 25th homer that season, it made the Marlins the first MLB team to have four infielders hit 25 or more in a season. Jorge joined first baseman Mike Jacobs, second baseman Dan Uggla and shortstop Hanley Ramírez who had already passed the mark. Had Jorge mashed just one more long ball, the entire infield would have topped 30, a completely unprecedented leap for a big league team. The good times rolled again in 2009 as Jorge set a personal best in RBI (100) while batting .289/.345/.443 in 149 games. He was red hot to start 2010, with at least a hit and an RBI in each of the first ten games, something never done before. Although he failed to get a RBI in the 11th game, he continued to hit, eventually extending his hitting streak to 21 games between the waning days of the previous season and the first game of a doubleheader on April 24th. When the streak ended, he had already driven in 20 runs with a week still to go in April. The hot start did not carry over for long; by the end of July he was hitting .262/.310/.409 with 10 homers and 54 RBI when the Marlins sent him to the Texas Rangers for a pair of minor leaguers (Evan Reed and Omar Poveda), neither of which was considered a prospect. He played sparingly with Texas, only 98 at-bats in 30 games, hitting .235/.279/.327 with a single homer. Jorge enjoyed his lone postseason work, playing one game in each of the three rounds, as the Rangers made it all the way to the World Series. He was 0 for 8 overall and let go at the end of the season.

Cantú signed with the San Diego Padres for 2011. He had a chance to succeed Adrian Gonzalez as the team's first baseman, but did not hit nearly enough to hold the job as the Padres wanted to give a couple of youngsters a look. In 57 games, he hit only .194/.232/.285 with 3 homers and was released on June 21st. He spent the remainder of the year with the Colorado Rockies' AAA affiliate, the Colorado Springs SkySox, then became a free agent and signed with the Los Angeles Angels of Anaheim for 2012, to serve as insurance if Mark Trumbo or Kendrys Morales were not to be fully healthy at the start of the year. He did not reach the majors again. He's continued to kick around baseball, spending a season (2014) with the Doosan Bears of the KBO. Since 2013, with the exception of his Korean adventure, he has seen time with several teams in the Mexican League. He was the first player with 100+ homers in both the majors and the Mexican League.

In international play, Jorge hit .333/.406/.630 as the Mexican national team shortstop in the 2003 Baseball World Cup. Eduardo Paret beat him out for the Cup All-Star team. In the 2009 WBC, Cantú was Mexico's third baseman and frequent clean-up hitter. He hit .360/.407/.800 with 2 homers, 5 runs scored and 6 RBI in 6 games. He was second on the club in RBI (one behind Adrián González) and tied for second in homers, one behind Karim Garcia. Jorge's home runs came off Pedro Luis Lazo and Hein Robb.