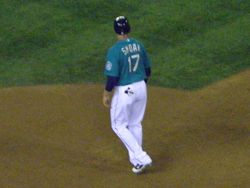 Justin Smoak was the 11th player selected in the 2008 amateur draft, taken by the Texas Rangers. He came to the majors less than two years later.

Smoak was a high school teammate of Matt Wieters. He hit .558 as a senior with 18 HR and 49 RBI and was chosen by several sources as a high school All-American, including Baseball America, which named him the top first baseman in US high schools. Due to his strong commitment to college, he was not picked until the 16th round of the 2005 amateur draft, when the Oakland Athletics chose him. He did not sign with them, as expected.

Justin batted .303/.407/.586 as a freshman and set USC freshman records for home runs (17) and RBI (63). He fielded .995 at first base. Baseball America named him as the first-team freshman All-American 1B; he did not win Southeastern Conference Freshman of the Year honors as those went to Pedro Alvarez.

Smoak was a star in the Cape Cod League in 2006, playing for the Cotuit Kettleers. He hit .286/.382/.565 and led the circuit with 11 home runs. He was 10th in average, led in slugging, tied for third with 27 RBI, tied for third with 10 doubles, was 5th with 25 runs and led in extra-base hits. He made the Cape Cod All-Star team at 1B and won the MVP award. Baseball America rated him as the top Cape Cod prospect, right ahead of Andrew Brackman and Matt Wieters. Among those he beat out for the All-Star spot at 1B was Matt LaPorta.

Smoak had another fine year in 2007, batting .315/.434/.631 with 22 home runs, 64 runs and 72 RBI in 66 games. He led the SEC in home runs and was one RBI shy of leader Sean Coughlin. Smoak again failed to make SEC first-team as LaPorta won those honors. Smoak tied for 4th in NCAA Division I in circuit clouts. Baseball America named him a third-team All-American.

Smoak played for Team USA that summer. He hit .190/~.227/.238 in the 2007 Pan American Games. With two outs, Alvarez on first and a 3-1 deficit in the 9th inning against the Cuban national team in the Gold Medal game, Smoak flew out against Pedro Luis Lazo, hitting one to CF Giorvis Duvergel to end the game. The US won its third Silver in a row with the loss. Smoak had driven in the US's only one of the Gold Medal game, singling in Jordan Danks while facing Adiel Palma in the 4th inning. In the 2007 World Port Tournament, he batted .208/~.296/.333, leading the tournament with 3 doubles but doing little else. Smoak hit .223 and slugged .380 for Team USA over the summer, leading the club with 10 doubles and ranking 4th with 19 RBI.

As a junior in 2008, Justin hit .383/.506/.757 with 23 homers, 72 RBI and 57 walks to 28 strikeouts. He was a consensus All-American at first base. He tied for 7th in NCAA Division I in homers and was 3rd in the SEC in average behind Sawyer Carroll and Gordon Beckham. He finished five homers behind league co-leaders Beckham (the Player of the Year in the SEC) and Matt Clark.

After being taken 11th in the 2008 amateur draft by the Texas Rangers, Smoak was signed just before the deadline by scout Jim Cuthbert. He debuted on August 18 with the Clinton LumberKings, going 1 for 3 with a walk, double and run. He hit .304/.355/.518 in 14 games for Clinton that year.

He again played for the USA at the 2009 Baseball World Cup, was named to the World Cup All-Tournament Team at 1B and was also given the Baseball World Cup MVP award for the tournament. He hit .268/.397/.786 for the Cup with 12 walks, 20 RBI and 15 runs. Justin was also named the IBAF's Senior Athlete award-winner for 2009, "His outstanding performance (a US World Cup-record nine home runs) at the 2009 Baseball World Cup helped Team USA win its second consecutive World Cup gold medal." [1] In the US's lone loss (against Venezuela), he went deep twice, doing well even when his club was struggling. Antonio Muñoz had previously held the World Cup record of 8 homers, set back in 1978; Smoak broke the mark in 2009 but Cuba's Alfredo Despaigne surpassed him by tourney's end. 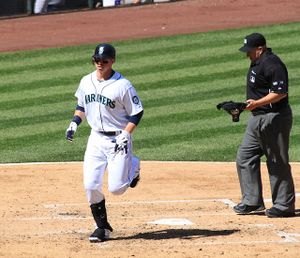 Justin debuted in the majors hitting 6th and playing first base. He grounded out against fellow youngster Max Scherzer in his first at-bat in The Show. He drew a 4-pitch walk from Scherzer the next time up, then flew out in the 6th. He coaxed a free pass from Fu-Te Ni in the bottom of the 9th with a 4-4 tie; Joaquin Arias pinch-ran and went on to score the winning run.

Smoak began his MLB career just 1 for 13, albeit with five walks. On April 29, he hit his first major league homer, against Gavin Floyd of the Chicago White Sox. On June 13, he tied a major league record by striking out 5 times in a 9-inning game. He hit only .209/.316/.353 in 70 games for the Rangers, then was a centerpiece of a major trade. Texas shipped him with Blake Beavan, Josh Lueke and Matthew Lawson to the Seattle Mariners for former Cy Young Award winner Cliff Lee, Mark Lowe and over $2 million. He hit .239/.287/.407 in 30 games for the Mariners, giving him an overall mark of .218 with 13 homers and 48 RBI in 100 games.

Smoak was the Mariners' starting first baseman in 2011. He played very well in April, but had some difficulty in May and then hit only .141 in July, coinciding with a team-record 17-game losing streak. He missed five games after taking a ground ball on his thumb in early August, then on August 12th was struck in the face by a ball hit by the Boston Red Sox's Jarrod Saltalamacchia that took a bad hop, breaking his nose. He was out for almost a month, during which time Mike Carp played very well while filling in for him, being named the American League Rookie of the Month for August. Shortly after his return, on September 8th, he hit his first home run since June 12th when he connected off the Kansas City Royals' Luke Hochevar for a two-run shot in a 4-1 Mariners win.

Smoak the joined the Toronto Blue Jays for the 2015 season, sharing first base duties with Edwin Encarnacion in a glove/bat arrangement (Smoak was the glove). On August 8th, by connecting against Ivan Nova in a key match-up with the New York Yankees, he not only hit his first career grand slam, but also the first by a Blue Jays player at the Yankees' home park since the creation of the team in 1977. He played more and more as the season advances, ending up with a .226 average in 132 games, but solid power numbers with 16 doubles and 18 triples, 44 runs and 59 RBIs. He also played in the postseason for the first time, but was held to 0-for-8 in 8 games as Chris Colabello received most of the playing time at first base during the Division Series and ALCS.

On May 3, 2016, he won a game against the Rangers almost single-handedly, as he hit a game-tying homer off closer Shawn Tolleson in the 9th, then followed that with a two-run walk-off shot off Phil Klein in the 10th to lead the Jays to a 3-1 win. Just after the All-Star break, the Blue Jays rewarded him for his production since joining the team by signing him to a two-year contract extension worth $8.5 million with an option for 2019 as well. He hit .217 in 126 games that season, with 14 homers and 34 RBIs, his defensive play being more impressive than his underwhelming offensive production. As a result, he was only used in three games in three rounds of the postseason, going just 0 for 2.

The Blue Jays had a very disappointing first half in 2017, failing to play .500 ball in a year during which they were expected to contend again. It was not Justin's fault, however, as he was the Jays' best player, hitting for both average and power and being voted the starting first baseman for the American League at the All-Star Game, even though he had not even been the Jays' Opening Day first sacker (Steve Pearce had got that call). He ended up having a career year, finishing the season with 38 homers, almost double his highest total until then to go along with a .270 average - also a career best by a country mile - and 90 RBIs, while scoring 85 runs. The Jays finished in fourth place, well below .500. The only question was whether he could reproduce that type of production in 2018. On April 1st, he gave an early indication that his previous season was not a fluke, when he went 3 for 4 with a walk and two homers in a 7-4 win over the New York Yankees. His first long ball, off Tommy Kahnle in the 7th, was good for two runs, then he followed that in the 8th with a grand slam off David Robertson that provided the winning margin. He was named the first recipient of the AL Player of the Week Award as a result of his performance. He ended up hitting .242 in 147 games that season, with 34 doubles, 25 homers and 77 RBIs. He returned for one more season as the Jays' starting first baseman in 2019, but it was clearly a transition year as the Jays started giving playing time to some promising young players coming up through their system, particularly Vladimir Guerrero Jr., Bo Bichette and Cavan Biggio, as well as Rowdy Tellez, who as a 1B/DH competed directly with Smoak for playing time. Justin's batting average fell to .208 in 121 games, but he still showed decent power with 16 doubles and 22 homers, and his OPS + remained correct at 101, even if he had fallen quite a ways from his All-Star season two years earlier.

The Blue Jays did not make an effort to retain Smoak's services when he became a free agent following the 2019 season. On December 20th, he signed on with the Milwaukee Brewers in what seemed to be a good fit given that incumbent 1B Eric Thames had just left via free agency himself. However, Justin was unable to do himself justice during the abbreviated 2020 season, hitting just .186 in 33 games, with 7 doubles and 5 homers. He was released on September 6th and picked up by the San Francisco Giants, but did not get a hit in 6 at-bats with them.

On January 6, 2021, he signed a one-year deal with the Yomiuri Giants of Nippon Pro Baseball, for $6 million.