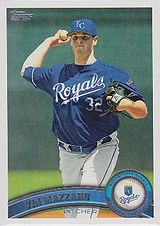 Mazzaro was drafted by the Oakland Athletics in the third round of the 2005 amateur draft, after being scouted by Jeff Bittiger. He went 9-9 with a 5.05 ERA for the 2006 Kane County Cougars. He allowed a .310 average. He was the second-youngest hurler on the club, after Jared Lansford. Mazzaro went 9-12 with a 5.33 ERA for the 2007 Stockton Ports.

Vin made major strides in 2008. He went 12-3 with a 1.90 ERA for the Midland Rockhounds, only giving up 3 homers in 137 1/3 IP. He was promoted to the AAA Sacramento River Cats, where he was 3-3 with a 6.15 ERA as the club's youngest pitcher. Overall, he led A's farmhands in both wins and innings and was secodn to Trevor Cahill in ERA (2.74). He tied Adam Pettyjohn, Madison Bumgarner, Sam Narron, Levi Maxwell and Scott Diamond for 5th in the affiliated minors in victories. He led the Texas League in wins, lowest average allowed (.229) and ERA (1.08 ahead of runner-up Matt Buschmann). He was named the TL Pitcher of the Year. Baseball America rated him the #4 prospect in the TL behind Dexter Fowler, Chris Davis and Kyle Blanks and right ahead of Elvis Andrus. They also rated him as having the circuit's best control.

Vin made his major league debut as the starting pitcher against White Sox. He had a rocky first inning. Scott Podsednik singled and stole second. Alexei Ramirez lined out, then Mazzaro picked Podsednik off second base. Jermaine Dye singled and Jim Thome drew a walk before Paul Konerko flew out to end the threat. Mazzaro settled down to give up just one more hit (and 3 walks) in the next 5 1/3 innings, leaving in favor of Craig Breslow. Breslow and Brad Ziegler concluded the shutout. He then added 7 1/3 scoreless innings in his second start on June 7 against the Orioles to pick up a second win.

Mazzaro began the 2011 season pitching for the AAA Omaha Storm Chasers, the minor league affiliate for the Royals. Despite being hit hard at AAA, Mazzaro was called up to the Royals where he continued to be roughed up, giving up 10 earned runs in one inning in his second appearance with the team on May 16th, and finishing the night after 2 1/3 innings allowing a team-record 14 earned runs. He was only the fourth pitcher since World War II to give up 14 runs in one game. He was immediately sent back to Omaha after that outing, his ERA at 22.74.

Pitching for the Pittsburgh Pirates, Vin had a memorable outing in relief against the Milwaukee Brewers on June 30, 2013. Coming in the game in the top of the 3rd inning after a 2-hour and 20-minute rain delay, he set down all 15 batters he faced in order over the next five innings, allowing the Pirates to tie the game in the 8th and eventually win it, 2-1, in the 14th. He was pitching so well that manager Clint Hurdle let him bat with two outs and a runner in scoring position in the 5th, and he responded with his first hit of the year off Tyler Thornburg, but the ball was hit so hard that Clint Barmes was unable to score. It was the longest perfect relief outing by a Pirate since Elmer Ponder went 5 2/3 innings back in 1919.