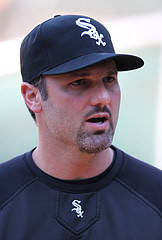 Paul Konerko is a six-time All-Star who has hit more than 400 home runs in the majors.

In the 1993 World Junior Championship, Konerko manned third base for the US and hit .387 with a .613 slugging percentage, 9 runs and 11 RBI. He led the Silver Medal winners in RBI and home runs.

He was selected by the Los Angeles Dodgers with the 13th pick in the first round of the 1994 amateur draft. In 1997, he was named the Minor League Player of the Year by Baseball America and Baseball Weekly and was named Pacific Coast League MVP. However, he struggled at the plate when called up by the Dodgers, and during the 1998 season, he was traded to the Cincinnati Reds, who in turn traded him to the Chicago White Sox following the season. The Sox installed him as their everyday first baseman, and he responded by becoming one of the better hitters in the majors. He hit 40 or more homers in both 2004 and 2005 and drove in at least 100 runs four times between 2002 and 2006. He also made the All-Star team three times, in 2002, 2005 and 2006 and played an integral role in the White Sox's run to a World Series title in 2005. He hit five homers in the postseason, including one in Game 2 of the World Series facing the Houston Astros, a 7th-inning grand slam off Chad Qualls that put the Sox ahead, 6-4. Following that season, he became a free agent, but despite lucrative offers from the Baltimore Orioles and Los Angeles Angels, he signed a $60-million, five-year deal to return to the Sox in 2006.

The 2004 and 2005 seasons represented a return to grace, as he had taken much criticism for his 2003 year in which he hit only .234 with 18 home runs. The next two seasons also allowed Konerko to shine for the first time on a team where he had previously played fourth fiddle to Frank Thomas, Magglio Ordonez, and Carlos Lee. However, while he became the biggest star on the White Sox, he never achieved major prominence in the league, having never finished higher than fifth in the MVP voting, in 2010.

In 2006, Konerko did all he could to justify his lucrative new contract. He made the All-Star team for a third time while posting a career-best .313 batting average. However, he again dropped to third fiddle on the team, as Jermaine Dye finished 5th in the MVP voting, and Jim Thome finished 12th, while Konerko was not in the top 20. He fell back slightly in 2007 and 2008, with batting averages of .259 and .240, 31 and 22 homers, and 90 and 62 RBI.

On April 13, 2009, Konerko and Jermaine Dye hit their 300th homers in the majors, the first teammates to do so in the same game. They managed the feat in back-to-back at-bats. If there was a sense that Konerko was entering his decline phase that season, he put an end to those thoughts by bouncing back with 28 homers, 88 RBI and a .277 average. He then had one of his best seasons in 2010, returning to the All-Star Game with a season of 39 homers, 111 RBI and a .312 batting average. At one point in the early season, he was outhomering the entire Seattle Mariners team by himself, before ceding the homer title to Jose Bautista of the Toronto Blue Jays. He continued apace in 2011, batting an even .300 with 31 homers and 105 RBI, and making the All-Star squad for the 5th time.

Konerko his his 400th career homer on April 25, 2012 off Grant Balfour of the Oakland A's, then on May 27th, became the second player after his former teammate Frank Thomas to have hit 400 homers as a member of the White Sox. He was in a tremendous hot streak at the time, having gone 23-for-46 (.565) to raise his average to .399 with 11 homers and 33 RBI in 45 games. Not surprisingly, he had carried his team to within half a game of the AL Central-leading Cleveland Indians. In the end, the White Sox ended up in second place, but behind the Detroit Tigers, while Konerko had a typically productive season, hitting .298 with 26 homers and 75 RBIs. Both he and the team fell off in 2013, however, the Sox ending up in last place in the AL Central while Konerko hit .244 with only 12 homers and 54 RBIs. There was speculation that he would retire at the end of the season, but on December 4th, he signed a one-year contract to return for a 16th season with Chicago at age 38. This time, however, he indicated clearly that the 2014 season would be his last and that he would hang up his spikes upon its completion. On April 23rd, he passed newly-elected Hall of Famer and former teammate Frank Thomas for most total bases in White Sox history at 3,950. As the season was winding down on September 27th, the White Sox honored him by unveiling a statue in his likeness in the left field concourse of U.S. Cellular Field and announced that his number 14 would be retired by the team the following season. He ended the year with a .207 average, 5 homers and 22 RBI in 81 games as rookie Jose Abreu emerged as one of the most-feared slugger in the American League and as a worthy successor at first base. In a fitting end to an all-around excellent career, he was honored as co-winner of the Roberto Clemente Award after the season, tied with Jimmy Rollins of the Philadelphia Phillies. The award recognized his numerous contributions in terms of community service and as a role model, in addition to his on-field production.

The official ceremony for the retirement of his uniform number by the White Sox took place on May 23, 2015. He became eligible for the Hall of Fame in its 2020 election but received only 10 votes and was dropped from the ballot, having failed to garner 5% of the vote.