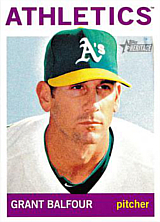 Grant Balfour played for Australia at the 2000 Olympics in Sydney. In the 1999 Intercontinental Cup, he allowed only one hit and one walk in 7 innings, striking out 7 and allowing no runs. He saved three games, most in the event, in helping Australia to its first Gold in any major international competition.

Grant made his big league debut with the Minnesota Twins in 2001, pitching parts of three seasons in the Twin Cities before resurfacing with the Milwaukee Brewers in 2007. He was dealt to the Tampa Bay Rays in July for Seth McClung, becoming one of the key components in turning the Rays bullpen from one of the worst in major league history in 2007 to one of the best in baseball in 2008. He scuffled to a 6.14 ERA in 22 games as a D-Ray in 2007, but in 2008, he was almost unhittable. In 58 1/3 innings, he allowed only 28 hits and 24 walks and struck out 82 batters on his way to posting a sparkling 1.54 ERA. He was used in pressure situations, picking up 6 wins and 4 saves, and continued to his fine work in the postseason, making clutch appearances in the first two games of the ALDS, both Ray wins over the Chicago White Sox. He pitched four times in the Rays' ALCS win over the Boston Red Sox, but gave up 5 runs in 1 1/3 innings. He also made 3 appearances in the 2008 World Series against the Philadelphia Phillies but was not sharp either, giving up a run on 4 hits and 3 walks in 3 innings. His troubles continued in 2009, when he ERA rose to 4.81 in 73 outings, as he posted a record of 5-4 and 4 saves. He was a lot better in 2010, when he made 57 appearances with a record of 2-1 and a 2.28 ERA. He pitched three times in the ALDS against the Texas Rangers that year and did not allow a run in 3 2/3 innings.

Balfour moved to the Oakland Athletics in 2011 and had a fine first season as a setup man, going 5-2, 2.47 in 62 games, striking out 59 in 62 innings. In 2012, he spent two stints as the team's closer. He held the role in April and early May, when he racked up a win and 7 saves, with 2 blown saves, but his ERA was in the high 4.00s. Rookie Ryan Cook took over as closer for a while and Grant returned to his familiar role of setup man, but he was promoted back to closer in early August. His return coincided with the team's surge to the top of the AL West standings. He recorded saves in 8 straight appearances to finish August and added 9 more saves in September without failing once to finish the season with a record of 3-2, 2.53 and 24 saves. He pitched 75 times, logging 74 2/3 innings during which he struck out 72 and walked 28. He was charged with the loss in Game 2 of the ALDS when he gave up a 9th-inning run to the Detroit Tigers, then came back to save a 2-0 win in Game 3.

Grant started the 2013 season red hot, successful in his first 22 save opportunities to reach a streak of 40 straight conversions over two seasons, equaling the Athletics' team record held by Hall of Famer Dennis Eckersley. He set a new record when he was successful against the Pittsburgh Pirates on July 8th, giving him 23 saves on the year and 41 straight successful conversions. He was named to the All-Star team, replacing teammate Bartolo Colon, who was ineligible under the "Sunday Starter rule", thus becoming the first Australian pitcher to be an All-Star. He finished the season with a record of 1-3, 2.59 and 38 saves in 65 outings. He pitched three times in the postseason, getting credit for the 1-0 win in Game 2 when he pitched a scoreless 9th inning against the Detroit Tigers before his teammates scored the winning run in the bottom of the inning; he added a save in Game 3, in an appearance in which he exchanged words with Miguel Cabrera, the two almost coming to blows.

Balfour became a free agent after the season and on December 17, he signed a two-year deal with the Baltimore Orioles for $15 million, stepping into the breach left when closer Jim Johnson was traded a few weeks earlier. However, the deal hit a snag when medical issues were uncovered during the physical that is always necessary before such deals are concluded. On December 20, the Orioles announced the deal had been voided. It took him another month to find another taker, when his former team, the Tampa Bay Rays, signed him for two years at $12 million on January 23, 2014. The Rays did not think there was anything wrong with Balfour, as he and his agent had loudly insisted after the Orioles deal went sour. Grant pitched 65 games in 2014, but was unable to reproduce his success from the previous two seasons. His ERA shot up to 4.91, and his record was 2-6 with 12 saves. He allowed 41 walks in 62 1/3 innings, which was the source of a lot of his struggles. He was back with Tampa Bay at the start of 2015, and while he did not allow a run in his first five outings, he also did not strike out anyone. A nightmarish appearance against the New York Yankees on April 18, in which he gave up three walks and a grand slam to Chris Young in two-thirds of an inning in a 9-0 loss, sealed his fate. After the game, he was designated for assignment to make room for Brandon Gomes. He would not make another big league appearance.

Balfour was inducted into the Baseball Australia Hall of Fame in 2015. His father, David, was general manager of the Australian Baseball League's Sydney Blue Sox, among other teams.