The 2013 All-Star Game was played on Tuesday, July 16, 2013 at Citi Field in New York, NY. The American League defeated the National League, 3-0 to win the home field advantage for its representative in the 2013 World Series. The game was dominated by pitching, as the National League was held to only 3 hits; fittingly, pitcher Mariano Rivera received the Ted Williams Award as the game's Most Valuable Player, after pitching a perfect 8th inning and announcing that he would retire at the end of the season.

This was only the second edition of the All-Star Game to be hosted by the New York Mets; the first came in 1964 and coincided with the opening of Shea Stadium. Mets captain David Wright was named Major League Baseball's official spokesperson for the All-Star Game festivities, while three former Mets players, Edgardo Alfonzo, John Franco and Mookie Wilson were named as co-ambassadors.

Jim Leyland of the Detroit Tigers managed the American League team, with coaches Robin Ventura of the Chicago White Sox and John Gibbons of the Toronto Blue Jays.

Bruce Bochy of the San Francisco Giants managed the National League team, with coaches Davey Johnson of the Washington Nationals and Terry Collins of the New York Mets. 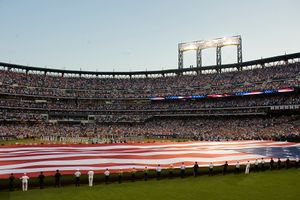 Giant flag unfurled before the game.

The American League won the game, 3-0, as its pitching completely stifled the National League's bats. Local hero Matt Harvey, in his first full season with the New York Mets, was on the mound to start the game, but got off on the wrong foot as he allowed a lead-off double to Mike Trout and then hit Robinson Cano with a pitch; Cano immediately left the game with a bruise on his upper leg and was replaced by pinch-runner Dustin Pedroia. However, Harvey recovered from his early trouble by disposing of the three big boppers that came next: Miguel Cabrera struck out, Chris Davis flied out to center and Jose Bautista struck out to end the inning. Max Scherzer of the Detroit Tigers, who got the starting assignment after going 13-1 in the first half, was more expeditive, retiring all three men he faced in order. Harvey came back for a second inning of work and this time retired the AL in order. He would be the only NL pitcher on the night to go 2 innings, as manager Bruce Bochy then used a different pitcher for each of the last seven innings.

For the American League, Chris Sale succeeded Scherzer on the mound, and he would be the only man to go two innings for the junior circuit, retiring all 6 men he faced. The AL opened the scoring in the top of the 4th, as Cabrera greeted Patrick Corbin with a double. Davis singled to place runners on the corners and Bautista followed with a fly ball to center, scoring Cabrera. Corbin then induced David Ortiz to ground into a double play to end the inning. Felix Hernandez took over on the mound for the AL, and the National League finally got its first baserunner when Carlos Beltran singled after one out; he was replaced by pinch-runner Andrew McCutchen who promptly stole second base, putting him in scoring position. However, the next two batters, Joey Votto and David Wright, both grounded out, and McCutchen was stranded. As massive changes began to be made, Cliff Lee took the mound for the NL in the 5th, and he gave up a second run, once again allowing a lead-off double, this time to Adam Jones, followed by a single by Joe Mauer. A ground ball by J.J. Hardy scored Jones, after which Trout grounded into a double play.

The National League was unable to generate any offense, however. All it had to show for the next two innings was a lead-off walk by Michael Cuddyer in the 6th, but he did not even make it to second base. For the AL, Nelson Cruz drew a lead-off walk against Aroldis Chapman in the 7th, but he was erased when the next batter, Edwin Encarnacion, grounded into a double play. In the bottom of the 7th, the NL got its second hit as Wright hit a one-out single off Greg Holland. Manager Jim Leyland then decided to play the lefty-righty match-up game, bringing in a pair of hard throwers from the Toronto Blue Jays' bullpen, who both did their job: lefty Brett Cecil struck out Domonic Brown and righty Steve Delabar whiffed Buster Posey to end the inning. The AL then added a third run against Craig Kimbrel in the 8th: Salvador Perez and Jhonny Peralta started off the inning with back-to-back singles. Kimbrel induced Torii Hunter to ground into a double play, but Jason Kipnis hit an automatic double that bounced into the left-field stands and Perez scored the third run.

The game's most memorable moment came in the bottom of the 8th, when Leyland called on all-time saves leader Mariano Rivera, who had announced before the start of the season that this would be his last year, to come and pitch. The players from both teams stayed in their dugouts as Rivera entered to the strains of Metallica's Enter Sandman, his usual entrance music at New Yankee Stadium, and had the whole of Citi Field to himself as he warmed up to a standing ovation from the sold-out crowd. He then proceeded to do what he does better than anyone in the history in the game, mowing down the three men he faced in order - Jean Segura, Allen Craig and Carlos Gomez. The last inning was anticlimactic. The huge Prince Fielder hit a rare triple off Jason Grilli to lead off the top of the 9th, but the next three batters went out meekly, then Joe Nathan came to pitch the bottom of the inning. He struck out Matt Carpenter and McCutchen, then Paul Goldschmidt doubled for the third NL hit, and only its second runner to reach scoring position. However, Pedro Alvarez popped out to second to end the game.

Chris Sale appropriately received credit for the win and likely would have been named the game's MVP had Rivera's pitching appearance not been couched in so much history. Mo was named the recipient of the Ted Williams Award, a decision that really was a lifetime achievement award for him. The loss was charged to Patrick Corbin, who gave up the first of the three AL runs.