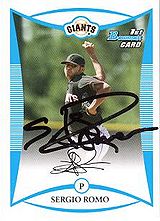 Sergio Romo is a relief pitcher who made his Major League debut with the San Francisco Giants in 2008. His brother Andrew Romo reached AAA.

Romo was drafted by the Giants in the 28th round of the 2005 amateur draft. He was signed by scout Joe Strain and made his pro debut that summer.

Romo was a part of the 2010 Giants team that won the World Series over the Texas Rangers. In 2012, he shared closer duties with Santiago Casilla during the regular season after Brian Wilson was injured early in the year, and picked up 15 saves. He was the closer in the postseason, and picked up saves in Games 2 and 3 of the 2012 World Series, both times completing 2-0 wins over the Detroit Tigers by pitching a scoreless 9th inning. He was again called upon in Game 4, after the Giants had taken a 4-3 lead in the top of the 10th. He dispatched the Tigers in brilliant fashion, fanning Austin Jackson, pinch-hitter Don Kelly and Miguel Cabrera in order to pick up his third save as the Giants completed a four-game sweep.

On January 1, 2013, he was involved in an incident in Las Vegas, NV, when he failed to produce appropriate identification to clear security at the city's airport. The incident degenerated, police intervened, and Romo was handcuffed, detained briefly, and issued a citation for violating airport rules. He issued a public apology two days later when the incident became public. He set a personal mark with 38 saves that season and was named to the All-Star team. In 2014, he was part of a third World series-winning team when he went 6-4, 3.72 with 23 saves during the regular season. The relatively high ERA resulted in his losing the closer's job to Casilla during the season. In the postseason, he went 1-1 with no saves in 9 appearances, giving up 1 earned run in 7 innings. That run was a walk-off homer by Kolten Wong of the St. Louis Cardinals that cost the Giants Game 2 of the NLCS on October 12th, but he was impeccable otherwise. In 2015, he was a set-up man for Casilla, going 0-5 but with a solid ERA of 2.98 and 34 holds in addition to 2 saves. He was then injured early in the 2016 season after making four appearances in early April and did not return until early July. The Giants had the best record in the majors at the All-Star break, but most of his 40 appearances came in the second half, when the team struggled badly and barely limped into the postseason as the NL's second wild card team. He was 1-0, 2.64 and saved 4 games, but even though Casilla struggled down the stretch, he was not given back his former role as closer. In the NLDS against the Chicago Cubs, he was part of a complete meltdown by the team's bullpen, giving up 3 runs in 2 innings over 2 appearances.

On February 15, 2017, he officially signed a one-year, $3 million deal with the Giants' bitter rivals, the Los Angeles Dodgers, to serve as a set-up man for Kenley Jansen. However, he ended up as one of the least effective pitchers on the Dodgers' staff, going 1-1, 6.12 in 30 games. He did manage to pick up 7 holds in 8 save opportunities and struck out 31 batters in 25 innings. He was designated for assignment on July 20th and two days later was traded to the Tampa Bay Rays for future considerations. He pitched much better for Tampa, putting up an ERA of 1.47 in 25 games. That convinced the Rays to re-sign him for another year. On May 19, 2018, he made his first start after 588 relief appearances as part of one of the "bullpen days" used by the Rays that year instead of having a fifth starter. The Rays were facing the Los Angeles Angels and had a lot of righthanded hitters at the top of the line-up, prompting manager Kevin Cash to devise a plan that had Romo pitching the 1st inning with lefty Ryan Yarbrough succeeding him for the next three or four frames. Romo was having a so-so season at that point, with a 4.96 ERA over his first 18 outings, but a solid 20 strikeouts in 16 1/3 innings. The plan worked as well as anyone could have anticipated as Romo struck out the side - Zack Cozart, Mike Trout and Justin Upton - and Yarbrough followed with not 3 or 4 but 6 scoreless innings before allowing a run in the 8th inning. No pitcher had pitched a perfect 1st inning and then left the game since Ernie Shore back in 1915. The Rays won the game, 5-3 and Cash was so pleased with how the strategy unfolded that he decided to have Romo start the next day's game as well. Matched against phenom Shohei Ohtani that day, he struck out 3 of the 6 batters he faced, issuing a pair of walks, before turning the ball over to Matt Andriese. Contrary to the previous day, however, the Rays had to use a parade of relievers to get through that game. Ohtani won the weird match-up, 5-2, with another strong pitching performance. The Rays then announced that Romo would again start back-to-back games, this time against the Baltimore Orioles, on May 25-26. He was charged with a loss in the first of these when he gave up a run while getting two outs in the 1st, then he was skipped over the next day and started on the 27th, but this time gave up 3 runs while retiring only one batter before Vidal Nuno bailed him out; the Rays won the game, however, 8-3, so Romo did not figure in the decision. After a "normal" relief appearance the next day, he earned his first save of the year on May 29th, pitching the last inning of a 4-3 win over the Oakland Athletics, although it was a shaky outing as he allowed 2 runs. For all the publicity given to his highly unusual pattern, he was not pitching particularly well (apart from his very first start), as his ERA had risen to 6.33 as May ended. On July 25th, he made another first, this time an appearance at third base for a third of an inning. It was another "bullpen game" for the Rays, this one necessitated by the fact that the team had traded the pitcher scheduled to start that day, Nathan Eovaldi, shortly before the game began. Romo was the fifth pitcher used by the Rays against the New York Yankees, coming on in the 8th, then he began the 9th manning the hot corner while Jonny Venters pitched to one batter. He then returned to the mound and recorded the final two outs in a 3-2 win, earning a save. He finished the year with a record of 3-4, 4.14 and 25 saves; his 73 appearances included 5 starts - all very short ones - and he pitched a total of 67 1/3 innings.

In 2019, Romo moved across the state to join the Miami Marlins, where he was the team's closer during the first half. He pitched quite well, going 2-0, 3.58 with 17 saves in 38 appearances for the struggling last-place team. That raised the interest of contenders looking for bullpen help, and on July 27th he was traded to the Minnesota Twins in return for minor leaguer Lewin Diaz. He pitched another 27 games for the Twins, going 0-1, 3.18 with 3 saves. The Twins won a division title and he pitched twice in the Division Series loss to the New York Yankees, allowing a pair of runs in 2 innings of work. He was back with Minnesota in 2020 and on September 12th was suspended for one game for a verbal altercation with the Cleveland Indians' Francisco Lindor the previous day. The two exchanged words after Romo had induced Lindor to fly out, prompting the benches to clear although no punches were thrown.