The 2012 San Francisco Giants suffered an immediate blow to their attempts to regain the NL West title when closer Brian Wilson had his second Tommy John surgery in mid-April and was lost for the remainder of the season. However, the Giants received a great group effort from Sergio Romo, Santiago Casilla and Jeremy Affeldt and did not suffer much from the absence of Wilson.

Pablo Sandoval began the season by getting hits in the first 20 games, to break Willie Mays' record for a hitting streak to begin a season. By the time the streak ended, Angel Pagan was more than halfway to a 20-game hitting streak of his own - the first time two Giants had 20-game streaks in the same season.

On June 13, Matt Cain threw a perfect game against the Houston Astros, tying Sandy Koufax' record for 14 strikeouts in a perfect game. Later in June, the Giants shut out their rival Dodgers three straight games (8-0, 2-0, 3-0), allowing a combined 16 hits, the first time that had happened in the team's 123-year history. The games were started by Barry Zito, Ryan Vogelsong and Tim Lincecum respectively, though none of the three ended with a shutout as they were combined efforts. 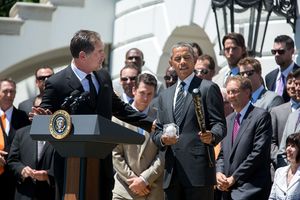 President Obama examines the autographed baseball and bat given to him by Manager Bruce Bochy, left, and the World Series Champion San Francisco Giants during a ceremony to honor the team and their 2012 World Series victory, on the South Lawn of the White House, July 29, 2013.

Melky Cabrera was the Giants' best player over the first half of the season, was voted to the All-Star team and won the All-Star Game Most Valuable Player Award, but his season ended in ignominy on August 15th when he was handed a 50-game suspension for testing positive for a PED. Although he would have been eligible to return in the postseason, the Giants cut off all ties with the disgraced outfielder, and he was also disqualified by Major League Baseball from being elgible for the batting title. His .346 average would have been the highest in the National League were it not for the decision. Instead, it was teammate C Buster Posey who won the title, finishing the year at .336 in a remarkable comeback from a severely broken ankle that had ended his 2011 season after 45 games. Posey added 24 home runs and 103 RBI to his batting average and was a runaway winner of the MVP Award, in addition to the Comeback Player of the Year Award.