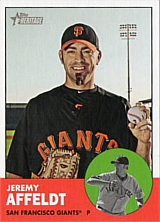 Jeremy struck out Kenny Lofton in his major league debut with the Kansas City Royals in 2002. His time in K.C. was never so rosy again; originally viewed as a starting pitcher, he alternated roles during his first three seasons before bottoming out in exclusive relief work in 2005. After parts of two uninspiring seasons with the Colorado Rockies, to whom he was traded partway through the 2006 season, he joined the San Francisco Giants in 2009 after a promising year with the Cincinnati Reds (1-1, 3.33 as more of a LOOGY in 74 games in 2008). He responded with his finest season as a Giant (2-2, 1.73 in another 74-game rodeo), a year which included a 28-inning scoreless streak. Affeldt was a good cog in the next seasons, despite injuring his hand during a playoff push in 2011 while separating frozen hamburger patties, but won three rings, finishing his career with a 0.77 ERA in ten Fall Classic appearances. He pitched 414 games for the Giants, all in relief, over seven seasons, and 774 games overall (including 42 starts - all of them dating back to his time with Kansas City).

Affeldt won the honor of baseball's most honest man when he realized the Giants were paying him $500,000 more than what had been agreed in contract negotiations. As Henry Schulman reported in the San Francisco Chronicle: "Affeldt was set to earn $4 million in 2010 under an existing contract with the Giants when they negotiated a two-year, $10 million extension. When the 2010 amount was rewritten into the new contract, someone made a clerical error and typed $4.5 million instead. The Giants and Affeldt signed it without recognizing the mistake." He could have kept the money but explained that he could not accept it as he felt it was not right. He had the contract corrected and returned the extra money.

Affeldt published his autobiography in 2013. In it, he talks of his struggles to become an established major leaguer and of his Christian faith, but also broaches on less usual topics, such as growing up as a military brat, how in moving to San Francisco, he managed to overcome his homophobia, and his involvement in combating human trafficking. It is also unusual in that Affeldt wrote the book without the assistance of a ghostwriter. Following his career, he became a studio analyst and on-air personality covering Giants games. He also became a Giants community ambassador.