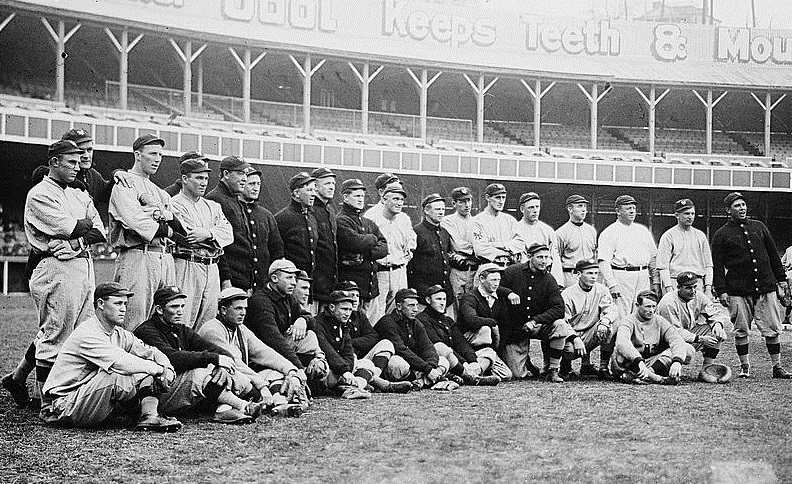 On April 11th, the wooden grandstand of the Polo Grounds, the home of the 1911 New York Giants, were destroyed in a major fire. The Giants had to make their temporary home in Hilltop Park, used by their American League rivals, the New York Highlanders. Owner John T. Brush took this as an opportunity to build a modern steel and concrete ballpark. Architects immediately started working on blueprints, the design was revealed publicly in May, and the new structure, seating 45,000, opened in August, although some construction was not quite complete.

The Giants were the greatest base-stealing team of all time, setting a record with 347 stolen bases, a figure that was approached only once, by the 1976 Oakland Athletics, who had 341. The leading thieves were LF Josh Devore (61) and CF Fred Snodgrass (51); not far behind were 1B Fred Merkle (49) and RF Red Murray (48). As manager John McGraw later put it: "The 1911 team stole the pennant".

While they won the pennant, it was by no means easy. They had to fight off four teams, the surprising Philadelphia Phillies who were in first place in mid-July but soon faded, and the last two pennant winners in the National League, the Chicago Cubs and Pittsburgh Pirates. On August 21st, all three teams were in a virtual tie for the lead, but the Giants managed to reel off eight straight wins in late August and early September to build a small cushion before heading on a lengthy road trip starting on September 10th. Luckily for them, their first opponents were the lowly Boston Rustlers, and they were able to sweep all four games from them, followed by three straight wins over the Pirates. They then went 5-2 against their next two opponents, the Cincinnati Reds and St. Louis Cardinals. Pittsburgh dropped off the pace completely and the Cubs could hardly keep up either, as the Giants had built up their lead to 7 1/2 games by the time they arrived in Chicago for a four-game set starting on September 27th. The Cubs won the first two games, but really needed a sweep to have any hopes of catching up, and these were dashed when New York won the final two contests of the series. Rube Marquard pitched a shutout in the finale to pretty much ice the pennant, and another shutout, this one by Christy Mathewson over the Brooklyn Dodgers on October 4th made things official. It was Marquard's first good season after the fans had decried his $10,000 purchase price for his first two seasons in Gotham, and he and Matty combined to go 50-20.