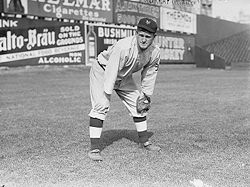 Outfielder Red Murray was one of John McGraw's players on the New York Giants for years, appearing in the 1911-13 World Series. However, he was at least as good a hitter in his years with the St. Louis Cardinals before he came to the Giants.

He had played baseball, basketball and football at Lock Haven College. After baseball, he served as a Democratic alderman in Elmira, NY for three years and was the town's recreation director for 18 years.