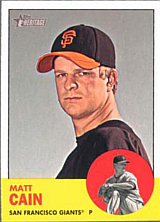 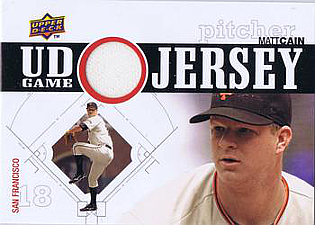 While there were often splashier pitching options on the championship San Francisco Giants squads of the early 2010s, none may have been more reliable than the big right-hander Matt Cain. He answered the bell for 30 or more starts each season from 2006 to 2013 before injuries took their toll, making three All-Star Game teams and pitching a perfect game in 2012. Though his career record only shook out at 104-118, he routinely suffered from a lack of run support, finishing with a more than respectable 3.68 ERA in a hitting-dominated era while striking out 1,694 hitters in 13 seasons.

In 2010, Cain was one of the heroes of the Giants' conquest of their first World Championship since moving to San Francisco. He went 13-11, 3.14 in the regular season, striking out 177 in 223 1/3 innings, then did not give up a single earned run in three postseason starts. He registered a no-decision in Game 2 of the NLDS against the Atlanta Braves, giving up an unearned run while pitching 6 2/3 innings, then won Game 3 of the NLCS by shutting out the Philadelphia Phillies on 2 hits over 7 innings. He was again brilliant in his only start of the World Series, keeping the Texas Rangers off the scoreboard over 7 2/3 innings as the Giants won the game, 9-0. His performance served to greatly increase his profile, as up to that point he had largely been overshadowed by teammate Tim Lincecum. He was named to the All-Star team for the second time in 2011, when he went 12-11, 2.88 with 179 strikeouts in 33 starts. His record could have been much better, given his ERA+ of 121 over 221 2/3 innings, but the Giants' offense was particularly anemic that year, costing him a number of wins.

On June 13, 2012, Cain threw a perfect game against the Houston Astros. The perfecto was the 22nd in major league history, and his 14 strikeouts tied Sandy Koufax for the most ever in one. It was the first perfect game in the history of the Giants, but the second in 2012, after that of Philip Humber (Felix Hernandez would throw an unprecedented third such game later in the season). The perfect game came in the middle of an 8-game winning streak by Cain. Cain started and won the 2012 All-Star Game and finished the year with his finest line: 16-5, 2.79, 193 strikeouts and 2 shutouts in 219 1/3 innings. With Lincecum having a down year, Cain became the de facto ace of the Giants, setting personal bests for wins, ERA, and strikeouts. He started Game 1 of the NLDS against the Cincinnati Reds on October 6th but was charged with the loss after giving up 3 runs in 5 innings; he came back to start the decisive Game 5 and earned the W, giving up another 3 runs in 5 2/3 innings as the Giants defeated the Reds, 6-4. He then started Game 3 of the NLCS against the St. Louis Cardinals and had a similar performance again, giving up 3 runs in 6 2/3 innings to be charged with his team's 3-1 loss. He was at his best in Game 7 on October 22nd, pitching 5 1/3 scoreless innings, giving up a walk and 5 hits, and leaving with a 7-0 lead. He was credited with the Giants' 9-0 victory that brought the team back to the World Series after a one-year hiatus. He started Game 4 of the Series against the Detroit Tigers on October 28th. He gave up a pair of homers to Miguel Cabrera and Delmon Young, accounting for all three runs the Tigers scored off him in 7 innings, then turned the ballgame over to his bullpen with the score tied, 3-3. The Giants went on to win the game in extra innings, completing a World Series sweep.

Cain had a rough start to his 2013 season, going 0-2, 6.49, in six April starts. He turned things around by going 4-0 in May with a 3.48 ERA, then, on June 13th, the first anniversary of his perfect game, he pitched his best game of the year. Facing the Pittsburgh Pirates, he was perfect through four innings before allowing a lead-off single to Garrett Jones in the 5th. He left after 7 innings, having allowed only two hits and was credited with his team's 10-0 win, improving to 5-3, 4.70 after 14 starts. Wins were few and far between from that point forward, as he only went 3-7 the rest of the way to finish at 8-10 in 30 starts with an ERA of 4.00. It was the first time he finished a season with an ERA+ below 100. In the second half, his ERA was a sparkling 2.36 in 11 starts, but he only had a 3-4 record to show for it. He again started 2014 slowly, going 0-3, 4.35 over his first five starts. On April 29th, he was fixing himself a sandwich in the clubhouse kitchen before a scheduled start against the San Diego Padres when he accidentally cut his hand with a knife. He was scratched, with Yusmeiro Petit pitching brilliantly as a last-minute stand-in, and a few days later, the Giants decided to place him on the 15-day disabled list after initially stating that he would be able to take his next turn in the rotation. He finally earned his first win of the year on May 15th, 6-4 over the Miami Marlins. But he never really got going, as he was shut down at the end of July because of bone chips in his throwing elbow which required season-ending surgery to remove. He was 2-7, 4.18 in 15 starts, his second consecutive subpar season, as the Giants acquired Jake Peavy to fill his spot and marched to their third world championship in five years.

Cain was back in good health in spring training in 2015 and was supposed to start the team's second game of the season on April 7th but was scratched and instead headed to the disabled list with a flexor tendon strain in his right arm. The injury ended up putting him on the shelf until July 2nd. He won his first game in over a year on July 7th when he pitched 6 innings of two-hit ball in defeating the New York Mets, 3-0. On August 28th, he returned to the disabled list with elbow nerve irritation. He made his fewest number of appearances since his initial season, 13 (with 11 starts), going 2-4, 5.79 in 60 2/3 innings. A hamstring injury cost him two months in 2016, but he was able to reach his 100th career win with a 3-1 victory over the Washington Nationals at home on trading deadline day, July 31st. Another tough season (4-8, 5.64 in 21 games and 17 starts) saw him left off the postseason roster as the Giants were unable to continue their even-numbered year magic to another title. As the 2017 season was winding down, Cain announced that he would retire following a final start on September 30th. He pitched 5 shutout innings against the San Diego Padres that day, then saluted the crowd as he was taken out of the game. Naturally, the Padres rallied to win, 3-2, in what were the closing stages of an awful season for the Giants. Cain finished his final season at 3-11, 5.43, reaching a few milestones in the process.

Cain holds several distinctions in Giants history, reaching many of them in his final season. He is one of only three men in the San Francisco era of the Giants to cross the 2,000 innings plateau. The others are Hall of Famers: Juan Marichal and Gaylord Perry. He also rates second in starts (331, behind Marichal) and third in strikeouts (1,694, behind Marichal and teammate Tim Lincecum). Cain also snuck into the top five all-time in Giants history (including their time as the New York Giants) in strikeouts in his final season, passing another Hall of Famer, Carl Hubbell, in the second half of the 2017 season. Lastly, he is one of only four men to spend his entire (ten year or better) career with the San Francisco iteration of the club, joining Jim Davenport, Scott Garrelts and Robby Thompson.

Fun fact: The first home run that Cain hit came in the same game as Barry Bonds' 757th, August 8, 2007. This is the highest number ever by a teammate of a player hitting his first career home run.