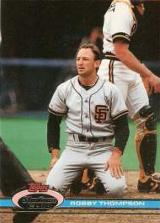 Second baseman Robby Thompson was signed after being picked in the secondary phase of the 1983 amateur draft by the San Francisco Giants and scout Tom Zimmer.

Thompson spent his entire career with the Giants and was the team's Opening Day starter at second base for eleven straight years, from 1986 to 1996. His best season came in 1993, when he hit .312 with 19 homers and was an All-Star and a Gold Glove winner. Thompson was the first San Francisco Giant to ever lead the National League in triples, when he did so in 1989; the last Giant to do so had been Willie Mays of the 1957 New York Giants. He became a free agent after the 1996 season and was invited to Spring Training with the Cleveland Indians the next year, but retired that spring.

After retiring, Thompson spent time as a minor league instructor for the Giants. He was the Giants first base coach in 2000 and 2001 and spent 2002 as a member of the Indians staff. From 2003 to 2010, he worked in the Tribe front office. When former Indians manager Eric Wedge was named manager of the Seattle Mariners for 2011, he nabbed Thompson to be his bench coach. Thompson had to step in for his boss on an interim basis starting on July 22, 2013 after Wedge was hospitalized following a dizzy spell during batting practice that day. Wedge was out for a little over a month, until August 24th; during that time, the Mariners went 13-15 under Thompson's guidance.

Thompson's son, Drew Thompson, played in the minor leagues from 2005-2011. His twin sons Logan Thompson and Tyler Thompson were drafted in the 2008 amateur draft. Tyler went to the University of Florida. Logan went to Palm Beach Community College, then signed with the Cleveland Indians after being drafted again in 2010.