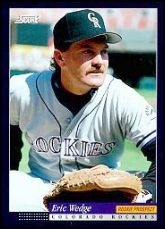 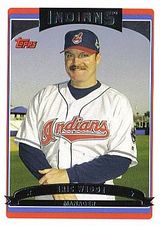 In 1989, Eric Wedge led college baseball in Total Bases and Walks, and was second in Runs and Runs Batted In while catching for the College World Series champion Wichita State Shockers. He was signed by scout Larry Thomas for the Boston Red Sox as a 3rd round selection in the 1989 amateur draft (one round ahead of 3B Jeff Bagwell). For the Elmira Pioneers that year, he hit .234 with 7 HR and 22 RBI in 41 games, but was named the #3 prospect in the league.

Wedge made his big league debut late in the 1991 season with the Red Sox and saw most of his big league playing time the next year with the BoSox, hitting 5 homers in 27 games. That winter, he was selected by the Colorado Rockies in the expansion draft but missed most of the 1993 season due to an elbow injury. He returned to the Red Sox in 1994 and had his last cup of coffee in the majors that year. He played in the minors through 1997.

After several seasons as a minor league manager, Wedge was skipper of the Cleveland Indians from 2003 to 2009. In 2011, he became the manager of the Seattle Mariners, staying until 2013.

Wedge led the Indians to the ALCS in 2007 and was named American League Manager of the Year as a result. He was fired after the 2009 season, but in 2011 was named manager of the Seattle Mariners. On July 22, 2013, he was hospitalized after suffering a dizzy spell during batting practice before one of his team's games. The cause of the fainting was not immediately identified and Wedge had to spend a few days in hospital as coach Robby Thompson filled in for him on an interim basis. The problem was identified as "a very mild stroke" and he made a full recovery, although he missed a full month while recovering. With the Mariners finishing the season in a disappointing fourth place, only saved from the cellar by the woeful performance of the Houston Astros, Wedge announced that he would not return for the 2014 season; the announcement came three days before the end of the season, at which point he would certainly have been dismissed anyway.

In 2016, he joined the Toronto Blue Jays front office as a player development adviser, although there was also speculation that he was a manager-in-waiting, in case John Gibbons was unable to repeat the previous year's success. He was one of a number of persons associated with the Cleveland Indians to be hired by the team following Mark Shapiro's appointment as team president. In November of 2017, he was one of the candidates to be interviewed as a potential successor for the fired Joe Girardi with the New York Yankees, but did not get the job. When Gibbons left the Blue Jays after the 2018 season, he did not get the job either, as it went to Charlie Montoyo instead.

Wedge became head coach at his alma mater for the 2020 season.

Wedge is the only player in Major League history with a last name that starts with "Wed".