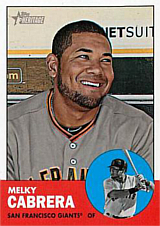 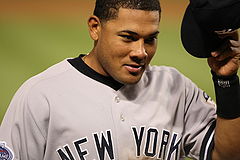 Melky Cabrera was the 2012 All-Star Game MVP with the San Francisco Giants. Months later, he was suspended for PED use.

Cabrera was signed by scouts Victor Mata and Carlos Rios for the New York Yankees in November 2001. He made his pro debut with the DSL Yankees the next summer. Nicknamed "The Milkman" by New York Yankees radio announcer John Sterling, he played center field for the Bronx Bombers from 2005 to 2009, the last season sharing playing time with young buck Brett Gardner. After being part of the 2009 World Series-winning team, he was included in the trade that brought pitcher Javier Vazquez to the Bronx from the Atlanta Braves. He slumped considerably in Georgia before enjoying a great season with the Kansas City Royals in 2011. Playing center field, he topped 100 runs scored and 200 hits for the first time in his career and drove in 85 runs from the second spot in the batting order, batting .305/.339/.470 in 155 games. After the season, he was traded to the San Francisco Giants in return for pitchers Jonathan Sanchez and Ryan Verdugo.

Melky had a tremendous month of May for the Giants in 2012. His 51 hits tied Randy Winn's club record (since the Giants moved to San Fran) for most hits during a month, set in September 2005. He was the first major leaguer to have 50 hits in any month since Carl Crawford in 2007. He hit .429 with 15 extra-base hits and 17 RBI and, on June 1, was leading the National League in average (.373) and the majors in hits. He was voted as a starter in the 2012 All-Star Game, ultimately his only appearance in the Mid-Summer Classic. He hit a key 1st inning single to launch the National League's 5-run outburst and added a homer in the 4th to claim the game's MVP.

He continued to dominate and was hitting .346 with a National League-leading 159 hits when everything came crashing down on August 15th. That day, with the Giants in first place, Melky was issued a 50-game suspension for testing positive for testosterone, a performance-enhancing drug. The length of the suspension meant that he could only return to play if the Giants made it to the second round of the postseason. At first, he seemed to accept his punishment, but news came out a few days later that, when advised of the positive test but before the results were public, he had attempted to concoct an elaborate scheme to prove his innocence, paying advisers to put up a fake website advertising a topical cream containing testosterone that Cabrera could then have claimed to have taken innocently. The plan was stopped before being fully implemented, but not before the fake product attracted the attention of federal investigators. Ironically, the suspension placed Cabrera in a position to contend for the NL batting title. With 501 plate appearances, he was one short of the minimum needed to qualify for the title; however, he was entitled to have as many plate appearances as necessary added to his total to reach the minimum, and the addition of this one hitless plate appearance put his "virtual average" still at .346. That was behind Andrew McCutchen's .359 and just ahead of Joey Votto's .342, but Cabrera's average was locked in at a very high figure, whereas the two other contenders still had a chance to encounter a slump and fall behind him before the end of the season. With the controversy becoming more public, McCutchen having fallen to .339, Cabrera announced on September 21st that he was taking his name out of the race for the batting title. This was done through a one-year agreement between MLB and the Players Association to the effect that rule 10.22 (a), which allows for extra plate appearances to be added to his record, would not be applied in his case, making him ineligible for the prestigious honor. On September 27th, the Giants announced that he would not be added to any postseason roster, even if the team was still playing when his suspension expired.

Although disgraced, Cabrera still attracted serious interest as a free agent, and on November 16th signed a two-year deal with the Toronto Blue Jays for $16 million. In 2013, Cabrera's name was tied up in the Biogenesis Laboratories scandal, but, in the end, he did not receive another suspension as it could not be determined that he had committed an additional offense to the one for which he had already been punished. That said, his first season with the Jays was quite a disappointment. He hit .279 in 88 games, with 3 homers and 30 RBI, showing none of the previous season's spark as the Blue Jays stumbled out of the gate and were never in the running in the AL East. His season ended early again, but this time for medical reasons, as he had a small tumor removed from his spine on August 30th. He had not played since August 1st because of an ankle injury, then complained of back pain, which led to the discovery.

Cabrera was back at full strength for spring training in 2014. He hit over .400 in Grapefruit League games and capped the preseason with a two-run homer against the New York Mets in the 8th inning of the second of two games played at Montreal's Stade Olympique just before Opening Day on March 29th. On April 4th, he was the first batter to face hyped free agent Masahiro Tanaka of the Yankees in a regular season game and hit a homer, although the Jays lost that game, 7-3. Cabrera kept on hitting in the next few games, putting together four consecutive games with a homer, thus exceeding his previous year's total after only 8 games. He explained that he had never been fully healthy the previous season, because of the back problem that was only discovered late in the year. He had a hit in 24 of the Jays' first 25 games of the season and set a new club mark with 41 hits in April. On August 10th, he became the first player since Rod Carew on May 12, 1972 to reach base 8 times in a game; it came in the longest game in Blue Jays history, as he accumulated 5 walks and 3 hits in 10 plate appearances. His last walk was an intentional one, just ahead of Jose Bautista's game-winning single in the bottom of the 19th inning. His season ended on a sour note as he fractured a finger while diving back into first base in a game against the Boston Red Sox on September 5th. He finished with a .301 average, 35 doubles, 16 homers, 81 runs scored and 73 RBI in 139 games.

Cabrera was a free agent again, and the Chicago White Sox won the bidding, with a three-year contract worth a reported $42 million. In his first season, 2015, he hit .273 with 12 homers and 77 RBI, but his OPS+ was below average at 97. He was a lot better in 2016, when he hit .296 with 14 homers and 96 RBI, his OBP also improving from .314 to .345. His OPS+ improved significantly to 118. Apart from a few weeks at the start of 2015, the White Sox were never really in postseason contention, and they began to rebuild following the 2016 season, the trade of ace Chris Sale being the first major move in that direction. In 2017, the rebuild only gained momentum, and it was clear that Melky, whose contract was about to run out, was on the trading block. On July 30th, he was sent to one of his former teams, the Royals, in return for youngsters Andre Davis and A.J. Puckett. He was hitting .295 with 13 home runs and 56 RBI at the time, slightly above his career norms, finishing the year at .285 with 17 homers and 85 RBI. It took until April 2018 to get his next deal, earning two stints with the Cleveland Indians and hitting .280 in 79 games. He spent 2019 with the Pittsburgh Pirates, again hitting .280 in 133 games while boasting the slowest sprint speed of all NL outfielders.