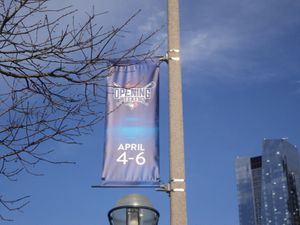 Opening Day banner for the 2014 Jays 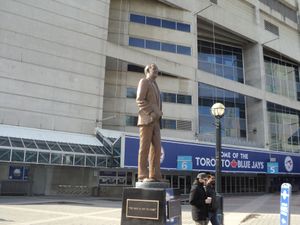 View of the new statue of Ted Rogers by Gate 6 at the Rogers Centre, February 2014

Before opening their season, the 2014 Toronto Blue Jays traveled to Montreal's Stade Olympique for a pair of exhibition games against the New York Mets, in the first major league games played in the French-speaking metropolis since the departure of the Montreal Expos at the end of the 2004 season. While the games were intended to solidify the Jays' fan base in what was once hostile territory, the huge turnout of fans was there mainly to show their love for their defunct team. However, the 46,000+ spectators cheered wildly as the Jays came back from a 4-2 deficit in the late innings of the first game and then won in the 9th on a two-out single up the middle by career minor leaguer Ricardo Nanita on March 28th. There were even more spectators present for the second game - over 50,000 - as the Jays defeated the Mets, 2-0, behind a great start by Brandon Morrow and a two-run homer by Melky Cabrera in the 8th.

If the successful series in Montreal had ended spring training on a positive note, some cold water was quickly thrown on Jays fans' hopes for an improvement after a dreadful 2013 season. First, it was learned that closer Casey Janssen, who had only made three appearances during the spring, had pulled a muscle in his back while warming up before pitching at the Big O and would need to start the season on the disabled list. The team traveled to St. Petersburg, FL to play its opening series against the Tampa Bay Rays and more bad news quickly followed. During the season opener on March 31st, SS Jose Reyes had to be removed from the game after his first at-bat, having aggravated a preexisting hamstring injury; he too was placed on the DL after the game. Starter R.A. Dickey struggled while his opponent, David Price, pitched 7 scoreless innings and the Jays ended up on the wrong end of a 9-2 thrashing. The Jays did win the other two games of the series, though. On April 1st, young Drew Hutchison was a 4-2 winner in his first game since June of 2012 and DH Adam Lind hit a three-run homer off Alex Cobb in the 1st inning; Sergio Santos, filling in for Janssen, recorded the save. On April 2nd, it was veteran Mark Buehrle who shined on the mound, coming within an out of pitching a complete game shutout and striking out 10 batters or more for only the second time of his career; Jose Bautista, who had been red hot throughout spring training, hit a pair of homers in the 3-0 win.

After going 2-2 in their first series, the Jays held their home opener at the Rogers Centre on April 4th, when they hosted the New York Yankees. The game was a media frenzy because it marked the first start of prize Japanese import Masahiro Tanaka with the Yankees, and dozens of Japanese journalists were on hand to cover the occasion. Melky Cabrera got things off to a good start for the Jays by leading off the bottom of the 1st with a homer off Tanaka, but that was the only highlight of the game as the Yankees prevailed, 7-3, behind a strong outing by the newcomer. Dustin McGowan was the loser his first start since 2011 for the Jays. On April 27th, the Blue Jays became the first team to field six players born in the Dominican Republic in their starting line-up in a 7-1 win over the Boston Red Sox. The players were SS Jose Reyes, LF Melky Cabrera, CF Jose Bautista, 1B Edwin Encarnacion, DH Juan Francisco and RF Moises Sierra.

The Blue Jays finished the month of April with a record of 12-15, 3 1/2 games out of first place. However, the team got red hot in May. Between May 12-27th, they won 13 of 15 games to go from 18-20 to 31-22 and take a three-game lead in the AL East. The team's offense was behind the success, with Encarnacion finding his power stroke and banging out a club-record-tying 14 homers during the month, while the team as a whole was leading the majors with 76 homers, with at least one long ball in each of the last 10 games of the string. The pitching was also strong, with Buehrle at 9-1 and Janssen being successful in all eight of his save opportunities during the string, after coming back from his early-season injury. The Jays made it 9 straight wins with a 3-2 defeat of the Tampa Bay Rays on May 28th. They did not hit any long balls in that game, but instead flashed some excellent defense and speed, as the winning run scored in the bottom of the 9th when Kevin Pillar raced all the way home from first on a bunt by Anthony Gose and a wild throw by Rays pitcher Juan Carlos Oviedo. The Jays came within an out of making it 10 straight wins when they hosted the Kansas City Royals on May 29th: leading 6-5, Janssen recorded the first two outs of the inning, the second coming when Bautista threw out Billy Butler at first base from his right field position, but a single, a stolen base and an errant throw by SS Jose Reyes on a ground ball allowed the Royals to tie the score, and then win with two runs in the top of the 10th. Encarnacion hit two more homer homers that day, breaking Bautista's team record for most homers in a month and tying Mickey Mantle's mark for most homers in May (16). With his fifth multiple-homer game of the month, he tied another mark, set by Harmon Killebrew in May of 1959 and Albert Belle in September of 1995. The Jays then managed to hold on to first place for all of June, finishing the month with a record of 45-39 and a 1 1/2 game lead in the AL East. They managed to do this in spite of Buehrle falling back to earth and going 1-4 for the month. 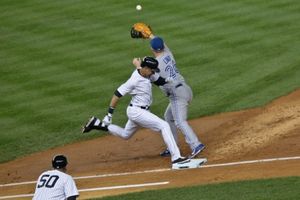 Derek Jeter outruns a throw to first base at Yankee Stadium Sept. 18, 2014 with Adam Lind on the bag

The Blue Jays ran into a rough patch in early July that saw them lose a season-high five consecutive games overall, and seven consecutive on the road. R.A. Dickey stopped the skid by shutting out the Los Angeles Angels of Anaheim for 7 innings on July 8th in a 4-0 win, his first victory in a month. The skid had pushed the Jays out of first place for the first time in over a month, with the Baltimore Orioles passing them. The skid coincided with Edwin Encarnacion going on the disabled list with a strained quadriceps muscle, forcing him to miss the 2014 All-Star Game, to which he had been named, along with Buehrle and Bautista, who was the leading vote-getter in all of baseball for the second time in four years. Another damaging injury occurred on July 9th, when Adam Lind suffered a fracture in his right foot, forcing him to miss six to eight weeks. 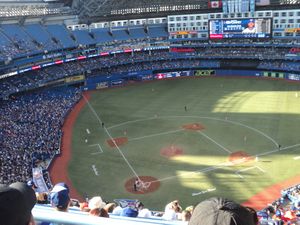 Jays-Orioles at home in Toronto, September 27th. Final at-home win for the team in 2014

On August 10th, the Blue Jays played the longest game in team history in terms of both time and innings, when they took 6 hours and 37 minutes to defeat the Detroit Tigers, 6-5, in 19 innings at the Rogers Centre. Buehrle was chased in the 4th inning after staking the Tigers to an early 5-0 lead, but the Jays clawed back to tie the game in the bottom of the 9th, then had to wait until the bottom of the 19th when Jose Bautista ended the game with a bases-loaded single off Rick Porcello. In the game, Melky Cabrera reached base 8 times with 5 walks, the last an intentional one just ahead of Bautista's game-ending single, and 3 singles, making him the first player to reach base 8 times in a game since Rod Carew on May 12, 1972. Reliever Chad Jenkins pitched 6 scoreless innings to earn the win. However, while there were some individual highlights during that time, the Jays simply could not put a string of wins together, and steadily lost ground to the Orioles as a result. They managed to win 2 of 3 against the Rays on the week-end of August 22-24 but wasted a possible sweep when they coughed up the final game in the 10th inning; they then had a chance to build some momentum when the reeling Red Sox came to town, riding a streak of 8 straight losses. Instead, they lost the first two games, once again faltering in extra innings on August 26th when they gave up 7 runs in the top of the 11th on their way to an 11-7 loss. That loss dropped them back to .500 for the first time since May 15th, and lowered their record that month to 6-16, virtually ending their postseason hopes.

More bad news followed in early September, as in the span of of a couple of days, they lost two key players for the season. First, Chad Jenkins, who had been one of the Jays' most effective relievers over the second half, broke a hand while shagging flies during batting practice, and on September 5th, Melky Cabrera broke a finger diving back to first base, dimming postseason hopes even more. It still took until September 23rd for the Jays to be mathematically eliminated from postseason contention, a huge disappointment given how well the team had played over the first half and the fact it had held a six-game lead in the AL East at one point. The news was made even more bitter on September 26th, when the Kansas City Royals clinched a postseason slot, ending a 29-year drought and at the same time making the Blue Jays the team with the longest such streak, their last postseason appearance having been in winning the 1993 World Series.