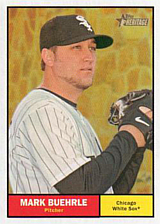 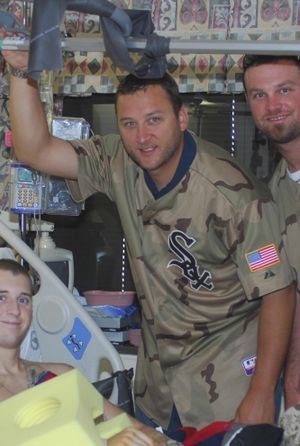 Pitcher Mark Buehrle attended Jefferson Community College, where he was a NJCAA Third Team All-American. He was drafted by the Chicago White Sox in the 38th round of the 1998 amateur draft and signed with the team the following May. He debuted with the Burlington Bees and went 7-4 with a 4.10 ERA; he struck out 91 while walking just 16, but allowed 105 hits in 99 innings. He had an excellent start in 2000, going 8-4, 2.28 for the Birmingham Barons with only 17 walks in 119 innings, and would be named the Southern League's Most Outstanding Pitcher and the lefty on the league's All-Star team.

After just over a year in the minors, Buehrle made the jump from AA to the Sox in July 2000. He pitched mainly out of the bullpen that season before joining the team's rotation the following year, pitching a one-hitter against the Tampa Bay Devil Rays on August 4, 2001. In his first five seasons as a starter, he was a model of consistency and durability, winning at least 14 games and throwing at least 220 innings each year. Buehrle pitched at least six innings in 49 consecutive starts from May 5, 2004 to August 1, 2005. He also earned the reputation as one of the fastest-working pitchers in baseball, occasionally finishing a game in under two hours. He started and won the 2005 All-Star Game, then went 2-0 with a save and a complete game in the 2005 postseason when the White Sox won their first World Series since 1917, sweeping the Houston Astros in four games. His complete game victory over the Los Angeles Angels of Anaheim in the 2005 ALCS was the first of four consecutive complete game victories for the White Sox.

On May 14, 2006 against the Minnesota Twins, Buehrle gave up seven runs in the first inning but still managed to get the win. He became the first pitcher in over a century to win a game after giving up at least seven runs in the first (the only other was Jack Powell of the St. Louis Cardinals on September 29, 1900). He was named to his third All-Star team that year but then had a horrible month of July, going 0-5 with an 11.48 ERA in 5 starts. He ended the season with his worst numbers since joining the Sox rotation: just 12 wins, a 4.99 ERA, and his first sub-.500 season. Undaunted, Buerhle pitched a no-hitter on April 18, 2007, giving up only one walk (to former White Sox outfielder Sammy Sosa, nearing the end of the line). It was the 16th no-hitter in White Sox history. On July 8th that year, Buerhle agreed to a four-year contract extension worth a reported $56 million. The contract included a no-trade clause in the first year, but its absence in the middle years of the contract were compensated with more guaranteed money should he be traded. 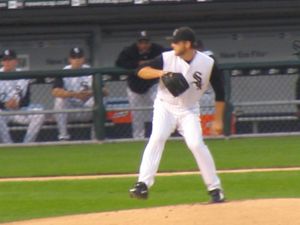 One year after leading the AL in starts, Mark made his fourth All-Star team in 2009, continuing to pitch well while the Sox moved back in the standings after winning an unexpected division title the previous year. He pitched a perfect inning in the 2009 All-Star Game, then, on July 23rd, he pitched a perfect game against the Tampa Bay Rays. It was only the 18th perfect game in Major League history and put Buehrle in exclusive company among pitchers who have pitched more than one no-hitter. He received significant help in the game from center fielder Dewayne Wise, inserted as a defensive substitute in the 9th, who made a tremendous leaping catch to rob Gabe Kapler of a home run and save the gem. After the game, he received a congratulatory phone call from President Barack Obama, whose support of the White Sox is well known. He had ended his last start before the perfect game by retiring the last hitter he faced, then, in the outing that followed the perfecto on July 28th against the Minnesota Twins, he retired the first 17 batters before walking Alexi Casilla with two outs in the 6th, ultimately losing that game, 5-3. That gave him a streak of 45 consecutive outs, which set a new major league record, topping the 41 retired by Bobby Jenks and Jim Barr, who had shared the record until then. Buehrle's major league mark was broken by Yusmeiro Petit of the San Francisco Giants who retired 46 consecutive batters in 2014, but it remains the American League record. He finished the year with a record of 13-10, 3.84. He completed his contract with the Pale Hose with two more solid if unspectacular seasons. In 2010, he was 13-13, 4.28, then was 13-9, 3.59 in 2011. He pitched over 200 innings both years, topping the mark for the 11th consecutive season making him a very valuable asset.

A free agent for the first time, Buehrle attracted a lot of interest as one of the better starting pitchers available on the open market. On December 7th, he (foolishly, as it turned outo) agreed to a four-year deal with the Miami Marlins worth $48 million. That allowed him to reunite with his former manager, Ozzie Guillen, who had also moved to the re-named Marlins earlier in the offseason. He had a good first season with the last-place Marlins in 2012, going 13-13, 3.74 while again pitching over 200 innings with a 125/40 K/BB ratio. He won his fourth consecutive Gold Glove Award, his first in the senior circuit. On November 13th, he was promptly traded to the Toronto Blue Jays in a blockbuster deal, alongside fellow free agent signee from the previous offseason Jose Reyes, pitcher Josh Johnson, catcher John Buck and utility man Emilio Bonifacio. In return, the Marlins received a package of mainly young players led by infielders Yunel Escobar and Adeiny Hechavarria, pitcher Henderson Alvarez, catcher Jeff Mathis, and three minor leaguers. When the controversial trade was officially approved by Commissioner Bud Selig, Buehrle publicly expressed his dismay about his Floridian adventure:

"Just like the fans in South Florida, I was lied to on multiple occasions... Throughout the recruiting process, the Marlins made repeated assurances about their long-term commitment to Mark and his family and their long-term commitment to building a winning tradition of Marlins baseball in the new stadium. This is unquestionably a business, and signing with the Marlins was a calculated risk. Mark held up his end of the bargain; unfortunately, the same can't be said of the Marlins."

While he was obviously pleased to join a contending team in Toronto, Buehrle had a family concern about moving to Ontario, as one of his family's dogs is a pitbull, which are banned in the Canadian province. He faced a similar issue in Miami, but the ban there was only municipal, and he was able to circumvent it by taking a home in nearby Broward County, a solution that was not as easy to implement in Toronto, as it would mean installing his family in New York state, a significant commute away from Toronto. In the end, he decided to be separated from his family for the first time, moving alone to Toronto as his wife, children (and dogs) remained in the Miami area. Preseason favorites in the AL East, the Blue Jays proved to be a major disappointment in 2013 despite all of their high-priced acquisitions. They started slowly, falling well below .500, with all of their starting pitchers struggling. With a loss on May 17th, Buehrle was at 1-3, 6.33 after 9 starts. The Jays played a bit better after that, managing to reach .500 in late June. Buehrle reached .500 himself on July 5th, improving to 5-5, 4.50 with a 4-0 win over the Minnesota Twins. The bottom then fell out, as the Jays lost all the ground they made up, falling back to 10 games below par. Buehrle lost his next two starts, but on July 25th he pitched his best game of the year in halting a seven-game losing skid by the Jays. That day, he hurled a two-hit shutout to defeat the Astros, 4-0, for his first shutout and complete game as a Blue Jay. He continued to pitch better down the stretch and finished the year at 12-10, 4.15 in 33 starts, pitching 203 innings; his ERA was the best among the Jays' starters.

Usually a slow starter, Buehrle went against his reputation in his first start of 2014 as he came within an out of a complete game shutout against the Tampa Bay Rays on April 2nd; he gave up a two-out single to Ben Zobrist and the bullpen was called in to get the last out in a 3-0 win. His 11 strikeouts that day were only the second time of his career he had been in double digits. He continued to dominate in the early going, as he became the first four-game winner in the majors with a 5-0 win over the Cleveland Indians on April 19th that lowered his ERA to 0.64. He was the first Jays starter to win his first four starts of the year since Roy Halladay in 2007. He suffered his first loss of the year on April 25th, 8-1 against the Boston Red Sox, but on May 7th became the first six-game winner in the majors when he defeated the Philadelphia Phillies, 10-0; he pitched 7 scoreless innings that day, lowering his ERA to 1.91. He continued to pace the majors in wins the rest of the month, also being the first to reach 8 and 9 wins, doing the latter with a 9-6 win over the Rays on May 27th. Win number 10, on June 1st, was a beauty, as he tossed 8 scoreless innings in shutting out the Kansas City Royals and lowered his ERA to 2.10. He showed his generosity when the Jays traveled to NYC in late July, taking five of the team's rookies to a favorite shop of his to have custom-made suits tailored for them. He finished the year at 13-10, 3.29, finding it hard to pick up wins after his hot start.

He recorded the 200th win of his career in his first start of the 2015 season, April 10th, against the Baltimore Orioles, giving up 2 runs in 6 innings in a game won 12-5 by the Jays. He was again the Jays' most effective starter in the first couple of months of the season, putting up a 7-4 record culminating with his 11th career shutout against the Washington Nationals on June 3rd. He continued to pitch well the rest of the year, finishing at 15-8, 3.81 in 32 starts. He was the top winner on the Jays as they won their first division title in two decades and led the AL in complete games and in fewest walks per 9 innings (1.495). For all that, he was not used in the postseason, manager John Gibbons preferring veteran knuckleballer R.A. Dickey over him. He became a free agent after the season and decided to retire with 214 wins in 16 seasons.

The White Sox retired Buehrle's uniform number, 56, in a ceremony on June 24, 2017. He first became eligible for the Hall of Fame in 2021 and actually received more votes than anyone else making his first appearance on the ballot that year, with 11%. That put him almost even with Andy Pettitte, who was likely to be his closest competition for consideration by voters in future years. However, he fell to 5.8% in 2022, barely enough to remain on the ballot for another year.