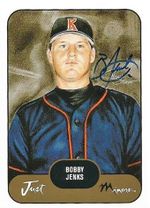 Famous for his checkered past, mammoth size, and blazing fastball, Bobby Jenks was the closer for the Chicago White Sox. A former top prospect in the Anaheim Angels system, pitcher Jenks missed most of the 2004 season due to an elbow injury. After the season, the White Sox claimed him off waivers. He was recalled from the AA Birmingham Barons in July 2005, and in September he filled in for the injured Dustin Hermanson as the team's closer. Jenks became the first rookie to close out a World Series after he recorded the final out of the 2005 Fall Classic. The then 27-year-old's weight had become somewhat of a calling card; Ozzie Guillen signaled for Jenks in the bullpen by holding out his arms to simulate the pitcher's size, and McDonald's named Jenks the Chicago area spokesman for the McGriddle breakfast sandwich.

Jenks grew up in rural Spirit Lake, ID, and had already dropped out of school when he was discovered by Mark Potoshnik, director of the Northwest Baseball Academy. Potoshnik took in the young fireballer and enrolled him in a local high school. Jenks was academically ineligible for all but one of his high school years. Despite strong numbers in amateur leagues, he was still little more than a wild and unpolished arm. Scouts caught notice of the young pitcher's wide 6'3" frame and electric fastball, but questions lingered about his ability to cope with professional baseball after growing up in a secluded Idaho cabin.

The Angels selected Jenks in the 5th round of the 2000 amateur draft. He was signed by scout Jack Uhey and made his pro debut that summer. Any concerns about his statistics were largely overshadowed by the numbers flashing on the radar gun. In 14 games with the Butte Copper Kings, Jenks piled up seven losses, 44 walks, and 19 wild pitches. He walked 64 more batters and posted a 5.27 ERA in 2001 while pitching for the Cedar Rapids Kernels. Thanks to a fastball that routinely eclipsed 100 miles per hour, Jenks was given a look with the double-A Arkansas Travelers; he picked up a win and 10 strikeouts in two starts. Familiar control problems continued to plague the young pitcher in 2002. Jenks walked 90 batters in just over 123 innings between single-A Rancho Cucamonga and double-A Arkansas. His record from the two stops was just 6-11, giving him a career record of 11-25.

"Big Bobby" faced more serious problems during the 2003 campaign. After winning seven games with a 2.17 ERA and 103 strikeouts in 16 starts for the Travelers, Jenks was sidelined by an elbow injury that needed surgery. The second problem was an article published by ESPN the Magazine that examined the 22-year-old's erratic behavior and rural background. The article described Jenks as an immature alcoholic - perhaps even a racist - with little regard for his health and career. One story involved Jenks drinking on the team bus, then lighting his own skin on fire. Jenks denied accusations that he used derogatory terms when referring to his former agent.

The Angels waived Jenks after he pitched fewer than 20 innings in 2004. Kenny Williams and the White Sox gambled that Jenks would return to form as a reliever. Given the opportunity to close for the double-A Birmingham Barons, Jenks saved 19 games with a 2.85 ERA. He was called up to the major leagues in July, and debuted against the Tampa Bay Devil Rays on July 6th. White Sox fans were immediately captured by the burly reliever's fastballs and lethal hooks. He earned his first major league save against the Minnesota Twins on August 25th. As Dustin Hermanson battled back problems, Jenks assumed a larger role in Chicago's chase for the pennant.

In the American League Division Series against the Boston Red Sox, Jenks saved two games and allowed only one hit over three innings. In Game 1 of the World Series against the Houston Astros, he struck out three and notched another save. After blowing a save - but ultimately picking up the win - in the Game 2 of the series, Jenk bounced back in Game 4. He picked up his fourth save of the postseason, securing the White Sox's first championship since 1917.

Jenks continued to pitch well in 2006. He converted 25 of his first 26 save opportunities and made the All-Star team. The closer's numbers trailed off a bit in the second half when the league began to catch on to his tendencies, but Jenks still ended the season with 41 saves. He began the 2007 campaign by saving 21 games in his first 23 appearances and made a second consecutive All-Star team. On August 12th, Jenks tied the Major League record for consecutive batters retired with 41 (set by Jim Barr in 1972) but the Sox lost the game to the Seattle Mariners, 6-0. Teammate Mark Buehrle broke the Jenks/Barr record in 2009. He ended the season with 40 saves and a 2.77 ERA. Jenks credited his success with learning to "pitch", as opposed to just throwing heat.

Bobby Jenks left the White Sox to sign as a free agent with the Boston Red Sox following the 2010 season. At that time, Jenks expressed his frustrations with Ozzie Guillen's management style: "I'll always respect (Ozzie Guillen) as a person and give him credit that's due, but I want to play for a manager who trusts his relievers, regardless of what's going on. With the way Ozzie was talking this winter and the way he treated me, I don't want to fight with the guy. How many times did he question my ability, and then saying how he would love to have me back, but I would have to come to Spring Training and fight for the closer's role like anyone else? Why would I come back to that negativity?"

Jenks' first season with Boston in 2011 was a major disappointment. He only pitched in 19 games and went on the disabled list three times. The first sojourn cost him almost all of May, the second lasted for three weeks in June, and he was finally shut down for good after his outing of July 7th. His ERA for the year was 6.32, having given up 22 hits and 13 walks in 15 2/3 innings. His record was 2-2, without a save. After the season, he underwent two complex surgeries that left him with a seven-inch scar on his back. The first, performed on December 12th, involved removing bone spurs from his spine. However, complications, including leaking spinal fluid and a subsequent infection, left Jenks in "excruciating pain" and forced him to undergo a second procedure on December 30th. His condition was very serious and even potentially life-threatening. He had to lose between 30 and 40 pounds in order to improve his chances for a full recovery. While he was with the Red Sox in spring training in 2012, there was no timetable for his return to the mound. Things got worse for him on March 23rd when he was arrested in Fort Myers, FL on charges of driving under the influence, destruction of property and leaving the scene of an accident. Jenks argued that the cause of his erratic driving was because "I took too many muscle relaxers." After further questions from police, he confessed that "I was just leaving Babes (nightclub) because I hit a car. I just had to get out of there."

He never pitched professionally again and was handed his release on July 3rd, ending a brief but very colorful career.

He was manager of the Grand Junction Rockies in 2022.