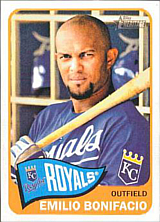 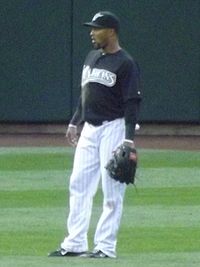 Emilio Bonifácio was signed by Arizona Diamondbacks scout Junior Noboa in 2001. He played for the DSL Diamondbacks in 2002 before coming stateside in 2003.

Bonifácio hit .250/.357/.333 with 5 runs scored and 3 steals (without getting caught) in six games for the Tigres del Licey in the 2008 Caribbean Series as the leadoff man for the champions. He made his big league debut with Arizona as a September call up in 2007 and saw limited action with them and the Washington Nationals before playing 127 games with the Fish in 2009. Emilio broke out in July 2011 with a 26-game hitting streak, the second longest in the history of the Florida Marlins. Largely as a result of the streak, he was named the National League's Player of the Month for July, having hit .380 with a .466 on-base percentage during the month, while stealing 16 bases and scoring 27 runs. He played 152 games for the Marlins that season, in spite of not having a set position: he started 61 at shortstop, 48 in the outfield spread between all three spots, 30 at third base and a pair at second base. Even with this moving around, he accumulated 641 plate appearances, and hit .296, scoring 78 runs, stealing 40 bases and hitting 26 doubles.

In 2012, he was given the starting center field job at the start of the season as the Marlins became the Miami Marlins and, after 39 games, was hitting .268 with a National League-leading 20 stolen bases. On May 18th, he injured his left thumb on a steal attempt and was placed on the disabled list for the first time of his career after the next game, and then had to undergo surgery on May 25th. As a result of the injury, he was limited to 64 games, during which he hit .258/.330/.316 with only a homer and 11 RBI; he did steal 30 bases in 33 attempts. On November 13th, he was included in a blockbuster trade with the Toronto Blue Jays that saw higher-priced veterans shortstop Jose Reyes, pitchers Mark Buehrle and Josh Johnson and catcher John Buck all head to Canada in return for a package of mainly young players including infielders Yunel Escobar and Adeiny Hechavarria, pitcher Henderson Alvarez, catcher Jeff Mathis and three minor leaguers.

Like many of the players acquired by the Blue Jays in their offseason deals, Bonifácio was a huge disappointment in 2013. He was hitting only .218 in 94 games when the last-place Jays decided to sell his contract to the Kansas City Royals on August 14th. He hit a lot better with K.C., improving to .285 in 42 games. He ended the year with a batting line of .243/.295/.331 with 3 homers and 31 RBI. He became a free agent and signed with the Chicago Cubs, who made him their Opening Day center fielder. He started the year red hot, going 4 for 5 with a double and stolen base in the team's opener against the Pittsburgh Pirates on March 31st, and then 5 for 7 in a 16-inning game on April 2nd, when he started at second base. In spite of his best efforts, the Cubs lost both games. They did win, 3-1, when he went 2 for 4 with a double, a stolen base and a pair of runs in his third game. He managed to keep his batting average at .500 until April 9th, and finished the month at .337. His average diminished gradually after that, and he missed a month and 10 days of action beginning on June 12th with a right oblique strain. On July 31st, after 69 games, he was still hitting a solid .279 when he was traded to the Atlanta Braves, along with pitcher James Russell, in return for catching prospect Victor Caratini. He finished the year with the Braves, hitting .212 in 41 games, for a combined batting line of .259/.305/.345 in 110 games.

On January 5, 2015, he signed a one-year contract with the Chicago White Sox. He played 47 games and hit only .167 before being released in mid-August. He then signed with the Chicago Cubs but did not return to the majors that year. He signed a one-year deal with the Braves before the 2016 season but he failed to make the team out of spring training and was cut a couple of days before Opening Day on April 2nd. He signed a minor league contract with Atlanta and they called him up on May 1st, but had failed to realize he needed to remain in the minor leagues for a full month before being eligible for a call-up. So, having already sent down pitcher Chris Withrow, they had to play their game one man short that day, until Emilio became once again eligible the next day. The Braves released him in 2017 after a miserable .132/.150/.211 start and he saw time in the Milwaukee Brewers and Tampa Bay Rays organizations in 2018 and 2019. He returned to the majors in 2020, playing 3 games for Washington and going 0 for 3.