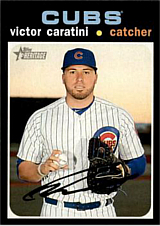 A graduate of the Puerto Rico Baseball Academy run by MLB, Victor Caratini was drafted in the 2nd round of the 2013 amateur draft by the Atlanta Braves after attending Miami Dade College. He began his career that year with the Danville Braves of the Appalachian League, where he hit .290 with 23 doubles in 49 games, playing mainly third base. Caratini was converted to catcher and moved to the Rome Braves of the South Atlantic League in 2014, where he hit .279/.352/.406 in 87 games. He collected 18 doubles, 4 triples and 5 homers in 323 at bats, scoring and driving in 42 runs. On July 31st, he gave more evidence of how well-regarded he was as a prospect, as he was traded to the Chicago Cubs, in a deal the Braves might like have to back, for infielder/outfielder Emilio Bonifacio and pitcher James Russell.

Víctor was called up to Chicago on June 28, 2017 when the Cubs designated for assignment backup catcher Miguel Montero following some comments to the media criticizing teammate Jake Arrieta. He made his debut that day, going 0-for-1 as a pinch-hitter against the Washington Nationals. His first major league homer came a month later, on July 30th against Zach Davies of the Milwaukee Brewers, breaking a 2-2 tie as the Cubs went on to win an important game, 3-2, at Miller Park. That day, the Cubs acquired veteran backstop Alex Avila in a trade with the Detroit Tigers, sending Victor back to the minors. The demotion did not last long as Willson Contreras went on the disabled list with a hamstring injury on August 9th, forcing the Cubs to recall Víctor to serve as Avila's backup. Ten days later, on August 19th, the Cubs claimed veteran René Rivera off waivers from the New York Mets, and Víctor was sent back to the minors. Overall, he played 83 games for the AAA Iowa Cubs, hitting .342/.393/.558 with 27 doubles and 10 homers en route to Cubs Minor League Player of the Year honors. As a big leaguer, he hit .254/.333/.356 with a homer in 31 games.

Caratini beefed up his big league time in 2018, but sputtered at the plate, hitting .232/.293/.304 in 76 games. He saw 20 games at first base and made a pair of mop up appearances on the mound. In 2019, he played 95 games (59 behind the dish and 23 at first with 2 more games pitching) hitting a more robust .266/.348/.447, belting 11 home runs in 244 at bats. In 2020, with the National League adopting the universal DH because of the shortened season caused by the Coronavirus pandemic, he shared catching duties with Contreras, with the one not starting behind the place being typically the team's DH. He thus started 21 games at C and 16 at DH among his 44 games, and hit .241 with 1 homer and 16 RBIs. He was used as a personal catcher for Yu Darvish, who was the Cubs' most successful starting pitcher that year. He also caught the no-hitter pitched by Alec Mills on September 13th. The Cubs returned to the postseason as division champions, but were swept in two games by the upstart Miami Marlins in the Wild Card Series. Victor went 1 for 6 in the two games. On December 28, he accompanied Darvish to San Diego as part of a blockbuster trade that saw the Padres land their second pitching ace in three days, following the acquisition of Blake Snell. In return, the Cubs obtained veteran starting P Zach Davies and four prospects: Reginald Preciado, Owen Caissie, Ismael Mena and Yeison Santana. In San Diego, Caratini would have a chance to contend for the starting catching job with Austin Nola.

On April 9, 2021, he put his name in the history books, when he caught the first no-hitter in franchise history, pitched by Joe Musgrove, another off-season acquisition, in the team's 52nd season. The Padres defeated the Texas Rangers, 3-0, and Caratini became the first catcher in history to catch the two most recent no-hitters with two different teams. He played a career high 116 games that season, batting .227 with 7 homers and 39 RBIs. On April 6, 2022 he was traded to the Milwaukee Brewers for two minor leaguers, Korry Howell and Brett Sullivan. The Brewers had just lost back-up catcher Pedro Severino to an 80-game suspension for PED use.