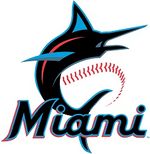 The 2020 Miami Marlins found themselves at the center of the news cycle when the season finally started after a delay of almost four months caused by the coronavirus pandemic. They split their first two games against the Philadelphia Phillies at Citizens Bank Park on July 24-25, then on the morning of July 26th, their players elected to play that day's game in spite of having a number of team members test positive for the virus (if they had strictly followed the health and safety protocols, they would have asked for the game to be postponed). They won that game, but this started an avalanche, and most likely contributed to the spread of contagion. The first infected player was C Jorge Alfaro, who was soon joined by 1B Garrett Cooper, P Jose Urena and OF Harold Ramirez.

They were unable to leave Philadelphia after the game, as they were awaiting test results, and their first home series, against the Baltimore Orioles, was postponed. The test results then showed that infection was now running rampant, with up to 19 members of the traveling party testing positive in the next couple of days. The team became the poster child for the dangers of returning to normal life too quickly, well beyond the sports pages. It was not clear if and when they could resume their season. The infection also had a ripple effect on other teams. The Phillies had to postpone games to allow for a thorough cleaning and disinfection of the visitors clubhouse, and then were set back by two positive tests of their own, forcing more postponements. Thus, six teams now had their schedules upended: the Marlins, Phillies and Orioles; the New York Yankees, who had been supposed to play the Phillies after the Marlins; and the Washington Nationals and Toronto Blue Jays, who were respectively the Marlins and Phillies' next scheduled opponents were now forced to sit idle for a whole week-end. Stories also emerged that some Marlins players had disobeyed team rules by going out on the town when the team played some preseason games in Atlanta, GA, and there was speculation that this was how the first cases started. Ironically, these repeated cancellations meant that the Marlins finished July on top of the NL East, thanks to their 2-1 record.

They were finally cleared to resume play on August 4th, facing the Orioles in a series moved to Baltimore, MD due to Hurricane Isaias bashing Florida, as all Biblical plagues were falling on their heads at once. The planned four-game series included a doubleheader in which the Orioles would be the home team in the opener, and the Marlins in the nitecap, with both games lasting seven innings. They were heading into these games with a completely revamped roster, as so many players were still in quarantine awaiting clearance to return to the team. In the meantime, the Marlins had picked up any live arm they could find on the waiver wire, given the virus had ravaged their bullpen, and had called up a group of players from their alternate training site. Thus, of the 30 players eligible for the August 4th game, 18 had not been on the opening day roster. They still managed to defeat the Orioles, 4-0. It was just one win in baseball terms, but it felt much bigger given that, as reporter Gabe Lacques put it: "For nine days, the Miami Marlins were not a team but rather a grim experiment in pandemic baseball gone wrong, forced into various modes of isolation and quarantine as their luxury accommodations in Philadelphia felt more and more like captivity." They then managed to sweep the split home team doubleheader on August 5th, 1-0 and 2-1, to jump to a very surprising 5-1 start. During that time, their unheralded pitching staff had managed to put together a 24-inning scoreless streak. On August 6th, they completed a four-game sweep of the Birds with an 8-7 win to improve to 6-1. The win was the 282nd with the Marlins for manager Don Mattingly, making him the winningest manager in franchise history, moving past Jack McKeon. On August 11th, they were the first team to travel to Buffalo, NY to visit the new temporary home of the Toronto Blue Jays, Sahlen Field and the next day completed an epic 23-day road trip with a 14-11 win against the Jays. They managed to overcome allowing 7 homers in that game before winning in extra innings to end the day at 8-4 - still the best record in the NL East!

On August 27th, the Marlins and the New York Mets staged a powerful walk-out in protest against police brutality and racism, as part of a movement sweeping the sports world. After taking the field, players from the two teams observed a 42-second moment of silence, the number 42 being obviously symbolic as it evoked Jackie Robinson on the eve of his annual day. The players then walked off the field and opted not to play. The Marlins put an exclamation mark on their remarkable season on September 25th when they a clinched a postseason slot for the first time since their 2003 World Series victory. They did it in spectacular fashion, too, as they defeated the New York Yankees, 4-3 in extra innings at New Yankee Stadium, by forcing D.J. LeMahieu to hit into a game-ending double play with the bases loaded. Observers were quick to point out that they were a Cinderella story the likes of which had rarely been seen in North American sports. Among the mind boggling statistics they had put up, they had used 61 players in just two months, including 18 who had never played in the majors before this season! Only five players spent the entire season on the major league rosters: 1B Jesus Aguilar, 3B Brian Anderson, and Ps Pablo Lopez, Brandon Kintzler and Brad Boxberger. 51 of their 58 games had been started by pitchers 25 or younger.