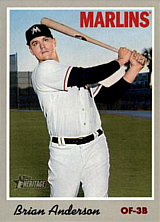 Brian Anderson was a third-round selection by the Miami Marlins in the 2014 amateur draft, out of the University of Arkansas. He had earlier been drafted in the 20th round by the Minnesota Twins in 2011, when he was coming out of high school.

Anderson began his pro career in 2014 playing second base for the Batavia Muckdogs of the New York-Penn League and the Greensboro Grasshoppers of the South Atlantic League. In 59 games, he hit .300/.363/.496 with 11 homers and 49 RBI for a very strong debut season. In 2015, he fell to .235 in 123 games for the Jupiter Hammerheads of the Florida State League, with 8 homers and 62 RBI. He was principally a third baseman that year, which would be his most common position over the following years as well. In 2016, he hit .302 in 49 games for Jupiter to earn a promotion to the Jacksonville Suns of the AA Southern League, where he hit .243 in 86 games. In 135 games between the two levels, his line was .265/.348/.389, with 11 homers and 69 RBIs The Marlins' AA affiliate was renamed the Jacksonville Jumbo Shrimp in 2017 and a solid first half there earned him a spot on the United States team for the 2017 Futures Game, played before a hometown crowd at Marlins Park on July 9th. He played the entire game, starting at DH and then moving to third base midway through the contest. He went 2 for 4 with a run scored but almost made a costly error with two outs in the 9th inning and the U.S. trying to hold on to a 7-6 lead with the tying run on base. Mauricio Dubon hit a bouncer to third and Brian rushed his throw to get the rapid runner, pulling first baseman Ryan McMahon off the bag. However, the Colorado Rockies farmhand made a great leaping catch, then tagged Dubon as he went by to end the game.

Brian made his big league debut on September 1, 2017, going 1-for-3 against the Philadelphia Phillies. He showed enough in 25 games and in spring training the next year to make the team for 2018, leading all Marlins in games played (156) and runs scored (87) while splitting time between right field and third base. He split time again between the two positions in 2019, establishing career highs in homers (20), RBI (66) and OPS (.811) despite his season ending in August due to injury. On August 11, 2020, he was the first major league player to homer at Sahlen Field in Buffalo, NY, going deep off Hyun-Jin Ryu of the Toronto Blue Jays in the 2nd inning of the first game played in the Jays' temporary home for the season. On September 18th, he became the first player to have a three-homer game at Marlins Park, turning the trick and collecting 7 RBIs in a 14-3 win over the Washington Nationals in the second game of a doubleheader.