The 2007 Toronto Blue Jays went 83-79, respectable enough, but not quite up to expectations. Their Pythagorean expectation was several games higher than that, and their big stars did not perform quite as well as hoped.

A big problem is that the team was decimated with injuries. Twelve players had to have surgery.

39-year-old Frank Thomas led the team with 26 home runs, 95 RBI, 81 walks, and a .377 OBP. While those were good totals, expectations had been high as he had hit 39 home runs the previous year with the 2006 Athletics. However, the Blue Jays were lucky to have the 39-year-old Thomas at all, as most people had thought he would stay with the Athletics in 2007 and his signing with the Blue Jays was a surprise. 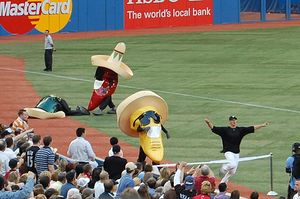 Vernon Wells, who signed a huge long-term contract early in 2007, disappointed with only a .245 batting average and a .402 slugging percentage. Wells had hit 32 home runs with a .303 batting average in 2006.

A surprise star was 26-year-old Alex Rios. On an older team where the average age was 30.5, Rios was one of the younger players. He had 43 doubles and 24 home runs, scoring 112 times. He also led the team in stolen bases with 16, getting caught only 4 times. 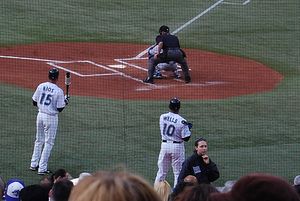 Wells and Rios before a game

Another 39-year-old, Matt Stairs, had the highest slugging percentage, slugging .549 in 357 at-bats. Even with his limited playing time, he was third highest on the team in home runs.

The youngest position player was highly-touted prospect Adam Lind, who had started the season in the minors. Lind hit only .238, but showed some promise with a .402 slugging percentage in 88 games. Another youngster, 25-year-old Aaron Hill, played second base and hit 17 home runs with a .291 batting average.