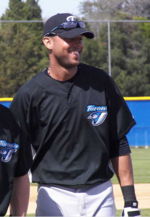 Alex Ríos finished second to Vladimir Guerrero in the 2007 Home Run Derby. He has twice struck out 5 times in a game.

In a stunning move, the Toronto Blue Jays placed Rios on waivers on August 10, 2009, even though he was their starting rightfielder and had a large amount of money remaining on his contract. He wasn't hitting badly at the time - .264/.314/.427 with 25 doubles and 14 homers in 108 games, but the Blue Jays had become tired of his lackadaisical approach to the game. The Chicago White Sox elected to claim him, taking over responsibility for the remainder of his contract. Moved to center field, he struggled the rest of the way, hitting .199 in 44 games for the Sox, but bounced back in 2010. In his second season with the Pale Hose, Rios hit .284/.334/.457 in 147 games (an 111 OPS+), with 29 doubles, 21 home runs and 88 RBI while playing a solid centerfield. However, it was back to bad Alex in 2011. he was limping along with a .218 batting average in 77 games when manager Ozzie Guillen boiled over at him on June 29th, pulling him out of a game with the Colorado Rockies for failing to hustle on the basepaths. Ozzie then blasted him to the media, in his usual colorful language: "Rios don't run the bases; that's why I got him out of the game. It's not the first time it happened. I don't like the way he runs the bases.. .  And that's a message for everyone: If they don't (bleeping) run the bases, their reputation comes on me, and I have a greater reputation in this (bleeping) game to do it that way."

On July 9, 2013, Rios became the 36th player in American League history to collect 6 hits in a 9-inning game, going 6-for-6 in an 11-4 win over the Detroit Tigers. The hits included a triple and 5 singles. He also tied the White Sox team record, last accomplished by Lance Johnson in 1995. On August 9th, he was traded to the Texas Rangers in return for a player to be named later, in order to replace Rangers RF Nelson Cruz, suspended for the remainder of the season because of his involvement in the Biogenesis affair. In his first game for Texas on August 10th, he tied the game with an RBI triple in the 8th inning against the Houston Astros, then scored the go-ahead run in a 5-4 win. On September 23rds, he hit for the cycle in a 12-0 drubbing of the Astros, getting the four needed hits in only 6 innings before leaving way for Engel Beltre.

When Adam Dunn finally reached the postseason with the 2014 Oakland Athletics, after 2,001 regular season games, it made Rios the active leader among players never to have played there, with 1,586 games, although this was still miles behind all-time leader Ernie Banks and his 2,528 games. On December 19, 2014, he signed a free agent contract with the Kansas City Royals for one year and $11 million. He took over in right field for the defending American league champions in 2015 and was off to a good start (9 for 28, .321) when on April 13th he was hit by a pitch from the Minnesota Twins' J.R. Graham, breaking a bone in his hand and putting him on the disabled list.