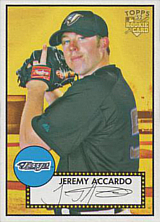 Jeremy Accardo was signed as an undrafted free agent by scout Doug Mapson for the San Francisco Giants in August 2003. He made his pro debut the next summer. Accardo led all Giants minor leaguers with 28 saves in 2004, 27 for the San Jose Giants and one for the Norwich Navigators. He earned his first major league win with the Giants on June 4, 2006, nearly one year after his debut, against the New York Mets. He was traded to the Toronto Blue Jays on July 22 for Shea Hillenbrand and Vinnie Chulk and e became their closer after B.J. Ryan was lost to an injury early in 2007. Jeremy recorded 30 saves with an excellent 2.14 ERA in 67 1/3 innings, but struggled badly in 2008, going 0-3, 6.57 in 16 games with 4 saves. He put up a solid 2.55 ERA in 26 games in 2009, but was not able to carve a spot in a crowded major league bullpen in 2010, appearing in only 5 games and spending the remainder of the season with the AAA Las Vegas 51s. He signed as a free agent with the Baltimore Orioles before the 2011 season and finished his big league career in 2012, split between the Cleveland Indians and Oakland Athletics. Accardo wore number 49 and number 37 during his playing days. Accardo continued to pitch after his major league career ended. He pitched in the Washington Nationals system in 2013 and finished his playing career in the Atlantic League with the Long Island Ducks and the Bridgeport Bluefish.

Following his playing career, Accardo returned to college to finish his undergraduate degree. Originally he had majored in engineering and physics, but decided to change his major to kinesiology. While attending Illinois State University, he also worked as a student assistant coach for the 2016 Redbirds.

Accardo returned to the professional ranks in 2017 as the pitching coach for the GCL Mets. He earned a promotion in 2018 and served as the bullpen coach for the Las Vegas 51s. Jeremy was named the New York Mets minor league pitching coordinator in 2019, then was promoted to a coaching job on the major league team on June 20th when both pitching coach Dave Eiland and bullpen coach Chuck Hernandez were fired. He was the third member of a triumvirate that also included 82-year-old Phil Regan as pitching coach and Ricky Bones as bullpen coach, with Accardo having the title of "pitching strategist"; all three titles came with the "interim" tag. Accardo was retained for 2020 as assistant pitching coach to new pitching coach Jeremy Hefner and remained in that role in 2021. He became pitching coach of the Nashville Sounds in 2022.