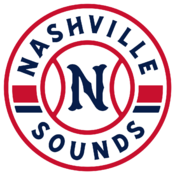 The Nashville Sounds, formerly of the Pacific Coast League, briefly in Triple-A East, and now in the International League, are the second franchise operating under that name in their third different league. The Milwaukee Brewers farmhands play their home games at First Horizon Park in Nashville, TN.

Nashville reached Triple-A status in 1985, when the Double-A Sounds' ownership bought and moved the Evansville Triplets of the old American Association. After the 1997 campaign, that circuit disappeared as Triple-A consolidated into two leagues for the second time - a move that put Nashville into the PCL as its easternmost location.

MLB's 2021 Minor League Reorganization moved the Sounds from the PCL to Triple-A East - which was actually, the International League that existed at the end of the Affiliated Era and which would resume the IL name in 2022.

Despite a bitter 2014 break-up, that reshuffle also returned the Sounds to the Brewers. The Brew Crew originally took on the Sounds after the Pittsburgh Pirates dropped them over the condition of Greer Stadium, but 10 years later the Sounds dropped the Brewers just as they finally moved into their new playpen.

The original Nashville Sounds played in the Double-A Southern League from 1978 through 1984, setting the circuit's season attendance record in 1980 after topping all of Minor League Baseball in their debut season with 380,159. The 2021 Sounds were the first to lead the minors in attendance as a Triple-A club.

This returned affiliated baseball to the Music City for the first time since the Nashville Vols folded after the 1963 campaign. Playing in Greer Stadium, which had been built for just $1 million with mostly volunteer and donated resources, the Cincinnati Reds' farm club led the league in attendance in its first season, won a championship in its second, and in its third set a Southern League season attendance record - 585,686 - that still stands.

During the 1984 season, Schmittou bought the Evansville Triplets of the American Association and moved that franchise to Nashville to bring Triple-A ball to the Music City. Schmittou originally planned to swap the teams' locations, but Evansville declined to improve its aging stadium. Instead, the former Southern League Sounds moved to Huntsville, AL to make room for Nashville to assume Triple-A status in 1985.

After spending their first two Triple-A seasons as a Detroit Tigers' affiliate, the Sounds rejoined the Reds in 1987. In their six years with Cincinnati, they reached the league championship series once (1990, the same season the Reds last won a World Series) but fell short in their quest for a title. They and the visiting Indianapolis Indians had the extremely rare experience of playing in consecutive no-hitters: On August 6, 1988, Indy starting pitcher Randy Johnson - just 40 days from his big-league debut - gave up an unearned run in the 1st inning that would leave him on the wrong end of a 1-0 score even though he and Pat Pacillo combined to hold the Sounds hitless. On August 7th, Jack Armstrong - less than two months after his Reds debut but also less than a year after being drafted - threw a complete-game no-hitter as the Sounds won, 4-0. The Sounds ended the generally positive partnership because the Reds insisted their pitchers hit even in games using the designated hitter. In 1993, they switched affiliations to the Chicago White Sox. They reached the league championships in their first two years with the club, but, again, lost each time. During five seasons with the ChiSox, the team featured future major leaguers Magglio Ordonez, Ray Durham and James Baldwin, among others.

After the 1997 season, the American Association ceased operations, with the Sounds among the teams that were moved into the Pacific Coast League. They also again changed parents, joining the Pittsburgh Pirates. Under the Pirates, they mostly struggled on the field but did reach the league championship series in 2003, again finishing as runner-up. Another highlight that year was pitcher John Wasdin throwing a perfect game on April 7th against the Albuquerque Isotopes. They moved to the Milwaukee Brewers in 2005. In their first year with the Brewers, led by top prospects Prince Fielder, Rickie Weeks, Corey Hart and Nelson Cruz (who was named the playoff MVP), they won the PCL title, giving Nashville its first championship in over two decades. They made the playoffs again in 2006, with one of the best regular-season records in the minors, but following devastating September call-ups were swept in the first round. In 2007, Manny Parra, one of the most coveted draft-and-follow players ever signed, threw a perfect game for the Sounds. They were scheduled to move into a new downtown ballpark to be called First Tennessee Field in 2008, but due to problems with financing and design plans, the deal fell through. Years later, a deal came together and a stadium of that name - but now First Horizon Park - opened in 2015. It may become a victim of its own success, if that success is contributing to what has become a credible effort to bring MLB to Nashville.

With the Minor League Reorganization following the cancelled 2020 season, Nashville changed leagues again, joining the Triple-A East section of the Professional Development League, which was composed mostly of former International League teams. However, as geographic considerations were paramount, Nashville and a few other teams were moved to the eastern component of the new structure.