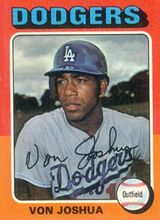 In a ten-year career, Von Joshua went from being a backup player for the Los Angeles Dodgers to a regular outfielder for the San Francisco Giants and the Milwaukee Brewers, to again being a backup for the Dodgers and finally for the Padres.

After appearing in the 1974 World Series for the Dodgers, his most impressive season was 1975, when he hit .318 for the Giants, with 10 triples.

When Joshua came back to the Dodgers in 1979, after being gone five years, he found that the four Dodger infielders and the catcher were exactly the same as in 1974, while the three outfielders were totally different people. He shared outfield playing time in both seasons with Joe Ferguson, the catcher/outfielder who was also traded away from the Dodgers and then returned.

In 1978, while playing in the Mexican League, he was briefly player-manager of the Cardenales de Tabasco.

In 1989, Von Joshua played for the St. Lucie Legends of the Senior Professional Baseball Association. Joshua batted .349 in 21 games.