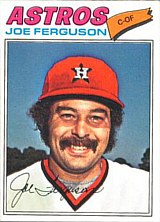 Catcher-outfielder Joe Ferguson played 14 seasons in the big leagues, showing good power with 122 career home runs. He toiled for several seasons in the Los Angeles Dodgers farm system before coming up for good in 1973.

In his first full major league season, Ferguson slugged 25 home runs. His production slipped to 16 home runs in 1974 and a broken arm in 1975 began a decline in playing time that he was never able to reverse. Ferguson remained a very productive hitter through 1980. He played briefly for the St. Louis Cardinals in 1976 and the Houston Astros in 1977 and 1978 before returning to the Dodgers in mid-1978. He missed the Dodgers' world championship in 1981, as he was released in mid-August; by then become a barely used pinch hitter with a batting average below .150. He did play in two World Series, in 1974 and 1978, both times in losing causes for the Dodgers. Still, he managed to catch on with the California Angels in September of 1981 and finished his career with two more seasons as Bob Boone's back-up, when both men were well into their 30s, playing his last game in June 1983.

Ferguson drew walks well, with a .240 lifetime batting average but a much higher .358 on-base percentage. He added decent power to that ability to get on base. He had 14 seasons in the majors with an Adjusted OPS of 116. Possessing a rifle arm behind the plate, Ferguson also played right field on occasion (207 games in the majors), especially after Steve Yeager began to assert himself as the Dodgers' catcher.

After his playing career, Ferguson was a Texas Rangers coach in 1986 and 1987 and a member of the Los Angeles Dodgers staff from 1988 to 1993. He managed the 1996 High Desert Mavericks, 1997-1999 Bowie Baysox and 2000-2002 Delmarva Shorebirds. He then managed in the independent Northeast League for two seasons before becoming the San Diego Padres minor league catching instructor in 2005 and a coach for the Eugene Emeralds in 2006. He was back managing in the indy leagues in 2007, with the Camden Riversharks.