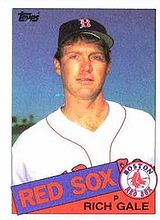 As a kid from northern New Hampshire, the chances of me ever getting to play professional baseball, much less stick in the Major Leagues and experience some success were pretty slim, really. It was a boyhood dream, a Little League dream. So it was great to have that opportunity." - Rich Gale

Pitcher Rich Gale won 55 games during seven years in the major leagues. Since his playing days ended, he has been a major and minor league pitching coach.

Born in New Hampshire, Gale attended the University of New Hampshire, where he played baseball and basketball. He was selected by the Kansas City Royals in the fifth round of the 1975 amateur draft and made his big league debut for the club in 1978. His rookie year proved to be his best in the majors, as he posted a 14-8 record with a 3.09 ERA and finished fourth in American League Rookie of the Year Award voting. He also hurled a one-hitter against the Texas Rangers on June 13th of that season. After dropping to 9-10 in 1979, he bounced back to 13-9 in 1980 as the Royals earned a trip to the World Series. He started Game 3 and Game 6 of the Fall Classic, taking the loss in the deciding contest.

Following the 1981 season, Gale was traded to the San Francisco Giants, and about a year later, he was dealt to the Cincinnati Reds. After playing one year in Cincinnati, he was released and signed by the Boston Red Sox, for whom he wrapped up his big league career in 1984.

After his major league days, Gale went to Japan for two years, starting in 1985. His team, the Hanshin Tigers, won their first-ever Japan Series in 1985, with Gale pitching the final game. After appearing in two games in the minors in the Red Sox organization in 1989, he played for the Fort Myers Sun Sox of the Senior Professional Baseball Association later that year, going 4-5 with the club. The next year, he was 2-2 with a 4.39 ERA in 5 games for the Sun Sox when the league folded. He returned to the Red Sox chain briefly in 1991, making one appearance for the Pawtucket Red Sox, for whom he was also a coach.

Gale is the last major league player to have come from the University of New Hampshire, with the school dropping the baseball program in 1997. In 2006, he earned honorable mention for New Hampshire Athlete of the Century.

During the 1981 players' strike, Gale was serving as a bartender at the Hyatt Regency Hotel in Kansas City when a disaster happened - a couple of skywalks collapsed, killing many people. Gale was near but not on or under the skywalks at the time.

Gale's son, Chris Gale, was selected by the Pittsburgh Pirates in the 2000 amateur draft and later played professionally in several independent leagues.