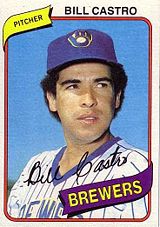 Bill Castro pitched ten years in the majors, primarily in relief. He had some excellent seasons with the Milwaukee Brewers, crafting a 1.81 ERA and 8 saves with only 17 strikeouts in 42 games (49 2/3 innings) in 1978. He piggybacked off his '78 success with a similarly sainted 1979, putting together a 3-1 record, 6 saves and a 2.03 ERA while striking out only 10 hitters . Most of his major league career was spent with the Milwaukee Brewers, missing out on Harvey's Wallbangers ride to the World Series in 1982, having moved along to first the New York Yankees and then the Kansas City Royals. He only struck out 203 men in 546 1/3 career innings, but finished with a very respectable 31-26, 3.33 career mark, saving 45 games.

After his retirement as a player, Castro told SABR researchers that he was actually one year and a half older than his listed birthday of December 13, 1953. Such fibbing on birth dates was quite common at the time; the fake age, usually to make the player appear younger than he was, is known as the player's baseball age.

Since his playing career ended, Bill has held various positions in the Milwaukee Brewers organization. He was a scout from 1985-1987 and the minor league pitching coordinator in 1989-1991. In 1992, he was named bullpen coach, staying on that particular job through 2008. He spent part of 2002 as the team's pitching coach and began the 2009 season in that same role, but was fired to make way for Chris Bosio on August 12th, with the team's hurlers badly underperforming. In 2011, he replaced Rich Gale as pitching coach of the Nashville Sounds when Gale resigned. In 2012, the Baltimore Orioles hired him to be their new bullpen coach, letting him go after 2013.