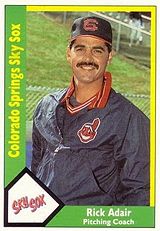 Pitcher Rick Adair was selected by the Seattle Mariners in the third round of the 1979 amateur draft and played seven seasons in the minors before his career was ended by elbow injuries.

Adair spent 2003 as the pitching coach for the Toronto Blue Jays' Double-A affiliate in the Eastern League, the New Hampshire Fisher Cats, before being named Minor League Pitching Coordinator for the Texas Rangers. On December 3, 2008 Adair was named Major League Pitching Coach for the Seattle Mariners, returning to the organization that drafted him, under new manager Don Wakamatsu, in 2009. He was fired after the 2010 season and then found work as bullpen coach of the Baltimore Orioles under Buck Showalter in 2011. On June 14th of that year, he was promoted to pitching coach when Mark Connor retired. He took a leave of absence from the job for personal reasons in 2013 and decided not return after the season.

Adair is the nephew of former big leaguer Art Fowler and a cousin to Wayne Tolleson and Mike Tolleson (first cousin, once removed). He is therefor also related to Steve Tolleson. He is the father of Travis Adair. He primarily wore number 24.