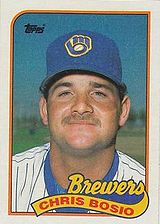 Pitcher Chris Bosio was signed as a 2nd round pick (secondary phase) in the January 1982 amateur draft by the Milwaukee Brewers and scout Harry Smith. Bosio made his major league debut in 1986 for the Brewers, the beginning of an 11 year career in the bigs. Bosio hung around with the Brewers through 1992, when he moved to the Seattle Mariners via free agency. He quickly made history in 1993 as he hurled a no-hitter on April 22nd versus the Boston Red Sox. That game turned out to be the highlight of his stay in Seattle. Injuries and declining production led Bosio out of the majors for good after playing for Seattle in 1996. In total, he was 94-93 with a 3.96 ERA in 309 games (246 starts).

In 2012, he followed former teammate Dale Sveum, who had just been named manager of the Chicago Cubs, becoming the team's pitching coach. He remained in the position under Joe Maddon until being fired in October 2017, after the Cubs had been ousted by the Los Angeles Dodgers in the 2017 NLCS. Still, he was on board when the Cubs ended their historic 108-year World Series title drought in 2016. Shortly after being let go, he was hired by the Detroit Tigers to be pitching coach in 2018. A couple of weeks into the season, he took a leave of absence for an undisclosed medical issue, with bullpen coach Rick Anderson taking over on an interim basis. On June 27th, he was fired for making "insensitive comments" that violated team policy. It was learned the following day that he had referred to pitcher Daniel Stumpf as "Spider Monkey" in the presence of others; he claimed it was an innocent nickname, although it seemed he was the only one to use what is often a racially-loaded term to refer to the player. Reactions to the firing were mixed, with some praising the Tigers for enforcing public decorum at a time when it was under assault from many quarters, and others wondering if such drastic action was justified for what was, it appears, a one-off comment with no harm intended. There was more to it though, as a year later, a former clubhouse attendant filed suit against Bosio and the Tigers in the third circuit court of Wayne County claiming that he suffered discriminatory remarks from Bosio and that upper management had tolerated a culture of racism and discrimination against African-American employees of the team. The "monkey" insult was apparently directed at the young employee, not at Stumpf, and was part of a pattern of harassment, the lawsuit claimed.