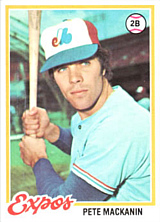 Light-hitting infielder Pete Mackanin played nine seasons in the majors, batting .226 over his career. He was a starter at second base for the Montreal Expos in 1975 and 1976, slugging 20 homers over the course of two seasons. Surprisingly, his 12 home runs as a second baseman in 1975 remained the Expos' record by a second baseman for two decades. Mike Lansing finally topped that mark with 20 homers in 1997. He also played in the big leagues with the Texas Rangers, Philadelphia Phillies, and Minnesota Twins.

After his playing career ended, Mackanin became a minor league manager and coach. He managed the Águilas del Zulia to the Venezuelan League title in 1988-1989 and on to the 1989 Caribbean Series, which the team won. He managed and played for the Florida Tropics during the second season (1990) of the Senior Professional Baseball Association, batting .188 in 9 games before the league folded.

As a minor league manager, he led the Ottawa Lynx to the International League title in 1995. In 1997, he became the Montreal Expos' third base coach, where he remained through 2001. After two years of minor league managing, he became bench coach for the Pittsburgh Pirates in 2003. Mackanin was named interim manager of the Pirates on September 6, 2005, replacing Lloyd McClendon. He did not win the job for the 2006 season, which instead went to Jim Tracy, even though Tracy had fared poorly with the 2005 Dodgers, a team with far greater resources. Mackanin moved down to the GCL Pirates in 2006, then got a job as the advance scout for the Cincinnati Reds in 2007. On July 1st, he was named interim manager of the Reds after Jerry Narron was fired with the team holding the worst record in the National League. The team bounced back under Mackanin's stewardship, playing over .500 for the remainder of the season, but he was nonetheless not confirmed after the season, as the Reds decided to hire veteran skipper Dusty Baker as their manager for 2008. Mackanin was hired by the New York Yankees as a major league scout for that season.

Mackanin was hired by the Phillies to be their bench coach beginning in 2009, staying until 2012. After sitting out a season, he was back with the Phils as third base coach in 2014. On June 26, 2015, he took over as the team's manager when Ryne Sandberg resigned suddenly with the team in last place. It was initially only supposed to last a few days, but on June 30th, the Phillies announced that he would keep the job for the remainder of the season. On September 22nd, pleased with the job he had done under difficult circumstances, new team President Andy MacPhail named him manager for the 2016 season as well, making the first time he was a big league skipper without the "interim" tag attached to his name. During the followed spring, the Phillies offered him a two-year contract to lead the team through its rebuilding phase. In early 2017, his contract was extended again, for a further two years, but with two days left in the season, the Phillies turned around and said he would not be back in 2018, being offered a job as a special assistant to General Manager Matt Klentak instead. This was somewhat surprising given the fact that after an awful first half, the Phillies had played quite well after the All-Star break, maintaining a record around .500 that promised better days ahead as the turnaround was largely based on the contributions of young players like Rhys Hoskins and Aaron Altherr.