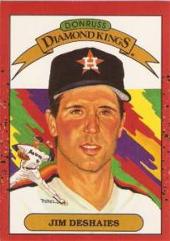 Jim Deshaies came up in the New York Yankees chain, appearing in two games for them in 1984. The next year, he was traded to the Houston Astros along with two players to be named later for Joe Niekro. He pitched in two games for Houston in 1985.

Deshaies had his true rookie year in 1986, posting a fine 12-5 record and 3.25 ERA for the NL West champions. On September 23rd, Deshaies struck out the first 8 men he faced in a start against the Los Angeles Dodgers, the first time this had been done in over 100 years. New York Giants Hall of Famer Mickey Welch struck out 9 in a row on August 28, 1884. No one else managed the feat in the 20th century, as the next pitcher to match his record was Jacob deGrom of the New York Mets on September 15, 2014. In congratulating deGrom for matching his feat, he humorously called it "one of the most hallowed records in all of sport". German Marquez then re-edited the mark, also in a late-season start, on September 26, 2018, pitching for the Colorado Rockies.

The lefty was scheduled to start Game 5 of the 1986 NLCS against the Mets, but when the game was rained out, he stepped aside for Nolan Ryan. Manager Hal Lanier could have used Deshaies in relief as the incredibly suspenseful Game 6 stretched into 16 innings, but he did not choose to do so.

From 1997 through 2012, Deshaies was a Houston Astros broadcaster. In 2013, when the Astros left the National League, Jim stayed in the senior circuit, switching to broadcasting for the Chicago Cubs.

When he became eligible for the Hall of Fame in 2001, he campaigned on the internet to get just one vote. His wish was granted when a Houston sportswriter voted for him.

Deshaies holds the all-time record for the most career at-bats (373) by a player with no extra-base hits. The previous record was 371 by Virgil Barnes, another pitcher.