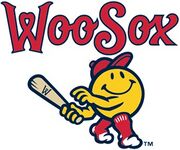 The Worcester Red Sox, of the International League and briefly in Triple-A East, are owned by a group led by 2002-2015 Boston Red Sox president Larry Lucchino. The Red Sox farmhands play their home games at Polar Park in Worcester, MA.

Given their proximity and Lucchino's status as BoSox president emeritus, the partnership likely has a long future; its long past dates to the 1965 Toronto Maple Leafs.

Worcester, however, has a very short Organized Baseball history - although, before its 1902 beginning, the Worcester Ruby Legs played in the National Association and the National League.

In August 2018,[1] after Pawtucket Red Sox owners couldn't get two different Rhode Island cities to build them a new ballpark[2], they responded to months of wooing from Worcester. The ownership group, which included Lucchino but was then led by James Skeffington, had purchased the club from the estate of longtime owner Ben Mondor, who died in 2010. Skeffington died after the move was decided but before it was completed.

The group first asked Providence, RI, and then Pawtucket, RI, to replace then 75-year-old McCoy Stadium, but all attempts failed. In November 2019, the team unveiled the name and logos [3]. Some logos and mascot Smiley Ball salute Worcester as the birthplace of the smiley face.

On July 9, 2022, the WooSox paid homage to their former home city played in PawSox jerseys and caps "PawSox Heritage Day" - and also saluted the most significant event in PawSox history, professional baseball's longest game ever.

The WooSox play Copa de la Diversión Hispanic engagement campaign games as Los Wepas de Worcester. The term doesn't have a direct translation but is used to express positive reactions such as excitement or delight. It was perhaps heard in the Woo when Worcester was announced as the third winner of the annual Copa in December 2021.