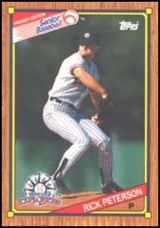 Pitcher Rick Peterson was picked by the Pittsburgh Pirates in the 21st round of the 1976 amateur draft and spent four years in their minor league system. In 67 career games, he went 6-11 with a 5.67 ERA. He debuted with the 1976 Niagara Falls Pirates, going 1-0 with one save a 4.20 ERA in 5 games, averaging a walk per inning and over a strikeout per inning. In '77, he was only 1-1 with a 8.23 ERA for the Salem Pirates, allowing over two baserunners per inning, and was also with the Charleston Patriots, he had a 3-3 record, one save and a 3.00 ERA and only walked 12 in 60 innings.

In 1989, he played for the Bradenton Explorers of the Senior Professional Baseball Association and went 4-2 for the club.

Having studied for several years under James Andrews, he is a firm believer in biomechanics.

He became the pitching coach of the Oakland Athletics in 1998. Under his leadership, Tim Hudson, Barry Zito, and Mark Mulder became 20 game winners. Peterson joined the New York Mets as pitching coach in 2003. He was fired along with manager Willie Randolph and first base coach Tom Nieto by the Mets on June 17, 2008. In 2012-2013, he was named director of pitching development for the Baltimore Orioles.

His father, catcher Hardy Peterson, played for the Pittsburgh Pirates in the 1950s, and was GM of the 1979 Pirates and 1990 Yankees.