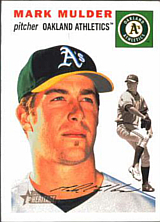 Mark Mulder went 1-0 with a 1.42 ERA for the 1999 Pan American Games. He got the start in the semifinals, which would determine who would advance to the 2000 Olympics. Mulder allowed one run in six innings but was matched by Mexico's Tavo Alvarez before Dan Wheeler relieved Mulder. The US rallied to win in extra innings.

Mulder pitched for the Oakland Athletics from 2000-2004, as a member of the Big Three in the starting rotation. He was traded to the St. Louis Cardinals in a deal that sent Danny Haren to Oakland.

He started the 2004 All-Star Game for the American League at Minute Maid Park in Houston. In a rare quirk, his teammates batted around against Roger Clemens in the 1st inning, scoring 6 runs, which meant that he got to bat before taking the mound. He struck out to end the inning. He received credit for the AL's 9-4 win in spite of giving up one run of his own.

In December of 2013, Mulder announced he would attempt to make a comeback, four years after his retirement following a string of shoulder surgeries. He had been working as a baseball analyst for ESPN since 2011 but scouts said his fastball had reached 90 mph in recent workouts. He was using a new delivery, inspired by that of Paco Rodriguez of the Los Angeles Dodgers. A workout in front of scouts was organized and he signed with the Los Angeles Angels of Anaheim. The comeback was short-lived though: during the first workout of spring training on February 15, 2014, he tore his left Achilles tendon during agility drills. He tried rehabbing the leg over the summer, but as spring training was about to start in 2015, he realized that he had not regained full strength, bringing his velocity down. As a result, he decided to give up his comeback attempt for good.

Mulder is a three-time winner (2015 to 2017) of the American Century Championship, considered the premier celebrity golf tournament. He played in the 2018 PGA Safeway Open via a sponsor's invitation.