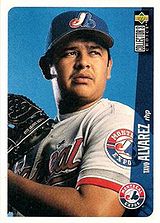 After being selected by the Montreal Expos in the 2nd round of the 1990 amateur draft, Tavo Álvarez quickly established himself as the team's top pitching prospect. He was a combined 17-5 with 125 strikeouts between Class A West Palm Beach and AA Harrisburg in 1992, but he was a victim of his success, pitching 186 innings that season, which led to arm woes the following year. Those cut his 1993 season short and prevented a September call-up, and then kept him on the sidelines the entire 1994 season. He returned to action in July 1995, and was called up to Montreal to make his Major League debut against the Los Angeles Dodgers on August 21, 1995 [1]. He remained in the starting rotation until the end of the year, but his record of 1-5 with a 6.75 ERA suggested he could have used a little more fine-tuning after his long layoff.

Álvarez started the 1996 season in the minors, but was called up to Montreal on April 20 and pitched pretty well until injuring a calf muscle on May 14. By the time he was healthy again, there was no room for him at the inn in Montreal and he went back to AAA Ottawa. He was called up again in September and pitched exclusively in relief, picking up a win and not giving up a run in six outings. He failed to make the team in 1997 and returned to Ottawa where mediocre results brought an end to his career. His main issue as a player, besides overuse at a young age, was his constant struggle to keep his weight under control, which compounded his injury problems.

In the 1999 Pan American Games, Alvarez went 1-0 with a 0.66 ERA, allowing 6 hits in 14 innings. He was second in the tournament in ERA behind Steve Green. In the semifinals against Team USA, Álvarez matched up evenly with Mark Mulder in a game that would have put Mexico into the 2000 Olympics. Álvarez only got one run of support, though, and reliever Vicente Palacios wound up losing the game in the 10th inning.

Álvarez coached for the 2011 Oaxaca Warriors.