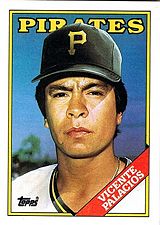 Vicente Palacios had an unimpressive career in the Mexican League from 1983 to 1986, with a composite record of 31-32, though he generally posted respectable strikeout totals. Property of the Chicago White Sox since midway of the 1984 season, he was also 2-3 in the Eastern League in the 1984 and 1985 seasons. The White Sox, deeming him a non-prospect, released him late in 1986.

In the 1986 off-season, Palacios developed a split-finger fastball. He improved drastically. That winter he was 10-2 with a 2.31 ERA and 109 strikeouts in 117 innings in the Mexican Pacific League; he led the LMP in Ks and ERA. Baseball America named him their Winter League Player of the Year. The Pittsburgh Pirates signed Palacios, lost him to the Milwaukee Brewers in the 1986 Rule V Draft and then he returned to the Pirates when Milwaukee decided not to keep him on the major league roster.

In 1987 Palacios dazzled for the Vancouver Canadians of the Pacific Coast League. He was 13-5 with a 2.58 ERA and 148 strikeouts. He led the circuit in shutouts (5), strikeouts and ERA and was named the 6th best prospect in the PCL by Baseball America. He got his first taste of the majors that year with the Buccos.

Palacios spent the next five years shuffling between the Pirates and their new top farm team, the Buffalo Bisons. In 1990, Palacios was 13-7 with a 3.43 ERA; he tied for third in the American Association in wins.

Palacios returned to the Mexican League in 1993 but was back in the majors the next season, spending 1994 and 1995 with the St. Louis Cardinals. When he threw a one-hitter in 1994, he became the last pitcher in the 20th Century to throw one on his birthday; it would be 24 years before Andrew Heaney was the next to do it. Milt Wilcox had preceded Palacios by 14 years. Palacios then had his third trip to the Liga, going 11-4 with a 3.59 ERA in 1997, one of his best years in his native country.

At the age of 35, Palacios had another rebirth. He moved to the bullpen full-time and was one of the dominant closers in Mexico, going 7-2 with 25 saves and a 1.18 ERA in 61 outings for Monterrey. After a spring training look by the Toronto Blue Jays in 1999, Palacios returned to Mexico and was 5-2 with 10 saves and a 0.95 ERA for the Reynosa Broncos with 68 strikeouts in 66 innings over 43 outings. The New York Mets signed Palacios and assigned him to their Norfolk Tides AAA affiliate - Vicente was 2-1 with a 1.86 ERA for Norfolk in 1999.

In the 1999 Pan American Games, Palacios entered the semifinal game in relief of Tavo Alvarez; the game would determine who would go to the 2000 Olympics. Palacios pitched effectively but in the 10th inning, he allowed a double to Marcus Jensen and a RBI single to pinch-hitter Mike Neill to cost Mexico the Olympic opportunity. The Team USA reliever, Dan Wheeler, simply proved more efficient on this day.

The Mets still released Palacios and he signed with the San Diego Padres for 2000. That year he made his first big-league appearance in five seasons, splitting the year between the Padres and their AAA club, the Las Vegas Stars.

Palacios returned to the Liga for his fifth go-around in Mexico, lasting till age 41 this time as he would pitch four more seasons, giving him 13 seasons there despite numerous trips to the majors and high US-based minors. Overall Palacios appeared on 17 different teams during his career, not even counting winter ball.

Palacios holds the all-time record for most at bats in a single season without recording either a hit or a walk. In 1994, he earned 0 hits and 0 walks in 33 at bats.

He managed the Olmecas de Tabasco in 2017.