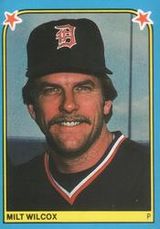 Milt Wilcox pitched for 16 seasons in the major leagues. While never an All-Star, he won over 100 games and struck out 1,000 batters. He appeared in two World Series, losing one game at age 20 and winning another game at age 34; the latter year, he won a career-high 17 games. He won the Allie Reynolds Award as the top pitcher in the American Association one year, one of two times he made a postseason All-Star team in Triple A. He was the third pitcher in AL history to come within one out of a perfect game only to fall short.

Wilcox's father was a track star in Hawaii and tried to get his sons to follow suit. When Milt opted for baseball instead, his father purchased lots of baseball books to try to teach him the game. [1]

Called up to the Reds, he went 3-1, 2.84, won a game in the 1970 NLCS, then lost one in the 1970 World Series. He held the record for the youngest pitcher ever to win a postseason game, a few months ahead of Francisco Rodriguez, until Madison Bumgarner broke the mark in 2010. In the NLCS win, facing the Pittsburgh Pirates, he struck out Matty Alou, Freddie Patek, Roberto Clemente (on three fastballs on the outside corner) and Willie Stargell in order. He relieved Tony Cloninger with a 2-2 tie in the 6th and worked three shutout frames before turning the ball over to Wayne Granger with a 3-2 lead. [4]

Wilcox had another fine year for the Reds (2-2, 3.32 with a save) and for the Indianapolis Indians (8-5, 2.20, 22 BB in 102 IP) in 1971. He tied two other pitchers for the 1971 American Association shutout lead (3) and joined J.R. Richard as the league's All-Star hurlers. Had he qualified (he was 38 innings short), he would have beaten Richard for the ERA title. In Cincinnati, Milt ran into conflict with Johnny Bench and Sparky Anderson after repeatedly shaking off their signals - "For some reason both Bench and Anderson thought they knew more about pitching than a twenty-year-old rookie." [5]

Milt was dealt to the Cleveland Indians for Ted Uhlaender in December of 1971. That winter, he was 3-2 with a 2.32 ERA for the Tigres de Aragua in the Venezuelan League. He went 2-1 in the postseason to help the team win its first title. [6] With Cleveland, he benefit from the tutelage of Gaylord Perry. Wilcox tried to learn the spitball from Perry, but had little success - "[t]hrowing it was easy. Throwing it near home plate was the tough part." Batters around the American League knew Wilcox was trying to learn the spitball, but did not know of his failure to do so. As a result, he was able to play mind games with hitters. [7] He went 7-14 his first year in Cleveland, but his 3.40 ERA was about average for an AL starter.

Wilcox was dealt to the Chicago Cubs for Dave LaRoche and Brock Davis. Used primarily as a mop-up man early in 1975, manager Jim Marshall shipped him to the Evansville Triplets, promising him a call-up if he got in shape after six weeks. He went 4-3 with a 4.31 ERA for Evansville. When he was not called up, he called the general manager, who said he was unaware of the deal and brought him back after a talk with Marshall. [11] Overall, Milt had a 5.63 ERA and went 0-1 in 25 outings for the Cubs that year.

Milt did well in spring training but was sent down to the Wichita Aeros to begin 1976 as the long reliever and 5th starter in a four-man rotation. The Detroit Tigers acquired Wilcox on a loan as their Evansville club needed help with an upcoming string of doubleheaders. Evansville eventually purchased Wilcox for some old uniforms [12] and he finished the year 6-7, 3.81 between the two stops. In his last winter in Venezuela, he was 1-3 with a 4.50 ERA for the Águilas del Zulia.

Wilcox started 1977 well in Evansville (9-4, 2.44) and was called up to Detroit, where he was put in the regular rotation in the majors for the first time since his arm injury four years earlier. He went 6-2 with a 3.64 ERA for Detroit to finish the season with 15 wins between the majors and minors. Having been a thrower before, Wilcox says he learned to pitch in Detroit. [13] He was two innings shy of qualifying for the 1977 American Association ERA title; he would have won by .10 over Jack Kucek. [14]

In 1982, Wilcox had a 12-10, 3.63 year, again an above average starter. In 1983, he had a 11-10, 3.97 season. On April 15th, he retired the first 26 batters he faced. Pinch-hitter Jerry Hairston ruined his perfect game bid by lining a pitch just out of the reach of Lou Whitaker. Milt did get credit for a one-hit shutout however but "felt rotten." He did not even go to bed that night, roaming the streets of Chicago instead. It was the third time in American League history that a perfect game had been broken up with one out to go, following Billy Pierce and Milt Pappas. [15]

In 1984, he became the first pitcher to spend an entire season in a team's starting rotation without recording a complete game. This is odd, as Wilcox had pitched at least 8 complete games each year in the majors to that point. He had a 1-0 lead after 8 against the Kansas City Royals in the division clincher and Sparky Anderson was willing to leave him in, but Wilcox opted to let Willie Hernandez finish up, which he did. 14 years after he had clinched the NL pennant for Cincinnati, he clinched it for Detroit. He said he was looking forward to October 5, 1998. [16] A lot was made about his lack of complete games at the time (the term "seven-inning pitcher" was still considered an insult), but such usage of a starting pitcher became quite common in future years. Milt finished with a 17-8, 4.00 line to set his career high in wins, tied with Bud Black, Doyle Alexander and Mark Langston for sixth in the 1984 AL. He won games in the 1984 ALCS and 1984 World Series to help Detroit claim the world championship. In Game 3 of the Series, he allowed one run in six innings before Bill Scherrer relieved in a 5-2 victory. His 14 years between postseason wins was a record that stood until 2015 when Bartolo Colon had 14 years, 12 days. [17] His 14-year span between first and last Series appearances set a record for a player-manager combo in MLB as Sparky Anderson managed him with both the 1970 Reds and 1984 Tigers. It wasn't until Tim Duncan/Gregg Popovich in 2014 that a player-head coach combo in another major US sport passed him (the NHL record was also 14 years). [18]

Wilcox hurt his arm early in 1985 and needed surgery, ending his season early at 1-3, 4.85. He even contemplated learning the knuckleball. [19] He pitched in winter ball for the first time in almost a decade, going 6-3 with a 3.54 ERA for the 1985-1986 Aguilas Cibaeñas. He was two wins behind league leader Mickey Mahler. He had a 11.12 ERA in the finals but his team won the title. [20] Detroit released Milt after 9 years together, and he was picked up by the Seattle Mariners, but only had a 0-8, 5.50 record out west when he was released in June of 1986, signaling his career was over.

Milt claimed not to be superstitious - it was only a coincidence he ate blueberry pancakes on the day he was to pitch, he never stepped on the foul line because of a habit, threw the same eight pitches in his warm-up as a routine, etc. [22]

In 2005, Wilcox competed with his dog "Sparky" (named for Sparky Anderson) at diving dog competitions (sort of a canine long-jump) and placed 5th in the national finals. He now owns Ultimate Air Dogs, a national dock jumping organization that sponsors dock jumping events. [23]

Milt has been a coach at Tiger Fantasy Camp in Lakeland, FL for a number of years. [24]