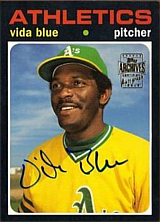 "I would go down to the bullpen in 1971 and watch Vida warm up. Then I'd walk down to the dugout and say, 'Game's over, boys. Shutout.'" - Rollie Fingers

"My first full year it probably was a combination of the hitters not seeing me as well as me not knowing them. Basically, the stupidity of me just going out there throwing was probably a big part of it. You have no fear. When you're that young and green, you don't think in terms of 'it's the bases loaded and I'm facing the 3-4-5 hitters in the Minnesota Twins lineup,' which would have included Harmon Killebrew. That's a very scary situation to be in. When you're a young pitcher, you don't think about it. You don't have time to get nervous." - Vida Blue, to George Castle, When The Game Changed 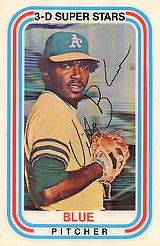 Vida Blue, a big star in his era, pitched 17 years in the major leagues, winning 209 games. He won the Cy Young Award and the MVP Award in the same year, 1971, appeared in three World Series and six All-Star Games, and won 20+ games in the regular season three times. There are three Hall of Famers on his similarity scores list, with the most similar being an A's teammate, Catfish Hunter.

Blue was the youngest pitcher (at age 22) to win the AL Cy Young Award award (Dwight Gooden won the award at age 20 in the National League). He had already pitched a no-hitter, achieving the feat on September 21, 1970 against the Minnesota Twins. On September 28, 1975, he would combine with three other pitchers to hurl a second no-hitter against the California Angels. After his great 1971 season, when he went 24-8, 1.82, with 301 strikeouts and 8 shutouts, Blue held out for more money at the start of 1972, threatening to retire and work for a plumbing supply company of which he was Vice President. In the end, he returned to the team but only went 6-10, 2.80 in 25 starts. Still, he was at his best in the postseason, pitching in relief in four of the five games against the Detroit Tigers in the 1972 ALCS, including four scoreless innings in relief of John Odom to pick up the save in the decisive Game 5. In the 1972 World Series, he added another save in Game 1 against the Cincinnati Reds, then after two more relief appearances, started Game 6, but lost, 8-1.

In 1973, he returned to form, going 20-9, 3.28; he was one of three 20-game winners for Oakland that year, the others being Hunter and Ken Holtzman. In the postseason, the A's lost all four of the games he started, but still managed to repeat as World Series champions, defeating the New York Mets in seven games. In 1974, he was 17-15, 3.25 during the season, but pitched a two-hit shutout against the Baltimore Orioles in Game 3 of the 1974 ALCS, then lost Game 2 of the 1974 World Series to the Los Angeles Dodgers. He came back to start Game 5 on October 17th and allowed only 2 runs in 6 2/3 innings, but Odom was credited with the win, with Rollie Fingers pitching three scoreless innings for the save, as Oakland won, 3-2, to make it three championships in a row. Hunter left as a free agent following the season due to a contract dispute with owner Charlie Finley, and Blue and Holtzman were the only two reliable starters left with the A's in 1975, but they still managed to capture the AL West flag for a fifth straight year, with Vida going 22-11 with a 3.01 ERA. In the ALCS, the A's were swept by the Boston Red Sox, with Blue starting and losing Game 2. By 1976, the Athletics were full of malcontents, as Finley did not wish to pay his stars anything close to their fair market value, and most of them were plotting their departure thanks to the Messersmith decision making free agency a new reality. At mid-season, Finley tried to sell three of these stars, Fingers and Joe Rudi to the Red Sox and Blue to the New York Yankees, but Commissioner Bowie Kuhn voided the deals, using his power to act "in the best interests of baseball". Still, there was some dismantling going on, as Holtzman and future Hall of Famer Reggie Jackson were traded to the Orioles in a move that weakened the A's and likely cost them another division title, as they fell just shy of the Kansas City Royals. Blue was by now the staff's sole ace and had another great year, finishing at 18-13, 2.35 with 20 complete games and 6 shutouts.

If things had started to unravel for Oakland during the 1976 season, 1977 marked a veritable exodus. Outfielders Rudi and Don Baylor left via free agency, as did third baseman Sal Bando, shortstop Bert Campaneris and ace reliever Fingers. The team was gutted and Blue was left as the only one of the players who had led the A's to three consecutive wins in the World Series only a few years earlier. He was profoundly demoralized and fell to 14-19 that season with a 3.83 ERA. He led the American League in losses, hits allowed (284) and earned runs allowed (119). Finley tried to pull another unbalanced trade to bring in some much needed cash, sending Blue to the Reds in return for minor league first baseman Dave Revering, but Kuhn disallowed that deal as well, as too much cash was involved for his liking. Just before the 1978 season, with the A's struggling to field a major league team, Blue was traded to the San Francisco Giants for seven players, the only seven-for-one trade in baseball history. He had an excellent first season for the Giants, going 18-10, 2.79, as the team was in unexpected contention for the NL West title. He finished third in the voting for the National League Cy Young Award that year, behind Gaylord Perry and Burt Hooton. He fell to 14-14, 5.01 in 1979, but bounced back the next two years, going 14-10, 2.97 in 1980 and 8-6, 2.45 during the strike-shortened 1981 season. He was traded to the Kansas City Royals at the end of spring training in 1982 in a four-for-two deal. He pitched well his first season, going 13-12, 3.78, but struggled early in 1983, going 0-5 with a 6.01 ERA, and was released. 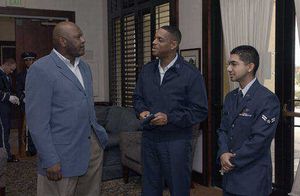 On December 15, 1983, Blue was suspended for one year by Commissioner Kuhn, alongside former Royals teammates Willie Aikens, Willie Wilson and Jerry Martin and Dodgers reliever Steve Howe, because of cocaine use. He was also sentenced to 90 days in jail for the offense. His career appeared to be over, given his poor performance and the stigma of drug use, but he made a comeback in 1985, pitching effectively for two more seasons with the Giants. He was 8-8 with a 4.47 ERA in 1985, then 10-10, 3.27 in 1986. He signed a free agent contract with the A's for 1987, but announced his retirement as spring training was about to open. There were rumors of a failed drug test that would have explained the sudden change of heart. In 1989, Blue suited up again, now playing for the St. Lucie Legends and Orlando Juice of the Senior Professional Baseball Association. He was 2-7 with a 4.87 ERA in 11 games with St. Lucie and 1-2 with a 7.20 ERA in 4 games with Orlando. Combined, Blue was 3-9 with a 5.55 ERA in 15 games. In 1990, he played for the San Bernardino Pride of the SPBA, pitching in 3 games with no record and a 4.15 ERA when the league folded.

Vida Blue is the answer to the great trivia question: "Who was the last switch-hitter to win the AL MVP Award?" Charles Finley, the owner of the Oakland A's, once offered Vida a bonus if he'd change his first name to "True". He is the only player in history to be credited with the win at the All-Star Game for both the AL and the NL. He was also the first pitcher to start the game for both leagues; he has since been joined by Randy Johnson, Roger Clemens and Roy Halladay.

Away from the diamond, Blue appeared in the 1972 blaxploitation film Black Gunn starring NFL legend Jim Brown. He also was a guest performer on a 1971 episode of Rowan & Martin's Laugh-In and performed on a USO tour with Bob Hope in December 1971, touring Vietnam, among other military bases. The jam band Vida Blue, featuring Page McConnell of Phish, (obviously) took their name from him. A screamo band, later known as Ten Grand, sold the rights to the name to McConnell for... $10,000.