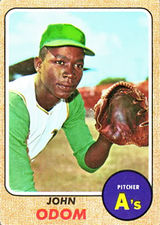 John "Blue Moon" Odom was one of the first star pitchers for the Oakland Athletics after they moved from Kansas City. He made the All-Star team in 1968 and 1969, winning at least 15 games and posting an ERA under 3.00 both seasons. When Oakland won their first World Series title in 1972, he went 15-6 with a 2.50 ERA. The team won additional world championships in the next two years, but Odom's numbers got worse: 5-12 in 1973 and 1-5 in 1974. Over the last two seasons of his career, he bounced around to four clubs: from the A's to the Cleveland Indians to the Atlanta Braves to the Chicago White Sox.

Odom was an excellent all-around athlete and was very fast. He was used as a pinch-runner 105 times in his career. However, he may be most remembered in that regard for killing an A's rally in the 1972 World Series against the Cincinnati Reds by trying to tag up and score from third base on a short pop up in the bottom of the 9th inning of Game 5. With one out and the A's down 5 to 4, Bert Campaneris popped up into short right field. Odom made an ill-advised dash for home and was thrown out easily by Reds second baseman Joe Morgan, making the last out of the game. Luckily for him, the A's eventually won the Series anyway, in 7 games.

On July 28, 1976 (Boxscore) while pitching for the White Sox, Odom combined with Francisco Barrios to no-hit the A's. He allowed no hits but issued 9 walks in 5 innings pitched. Odom also almost pitched a no-hitter on June 7, 1968, holding the Baltimore Orioles hitless until two outs in the 9th inning when Davey Johnson spoiled the bid with a single.

For his entire big league career, he wore the number 13.

In 1989, Odom played for the St. Petersburg Pelicans of the Senior Professional Baseball Association.