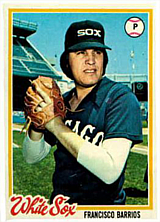 Francisco Barrios made his debut in professional baseball in 1971 with the San Luis Potosi Tuneros of the Mexican Center League, going 6-4 with a 3.20 ERA at the age of 17-18. In 1972, he made it to the Mexican League with the Jalisco Charros and went 1-1 with a 4.70 ERA in 8 appearances, including 2 starts. He did not fare well in the MCL that year, going 5-9 with an ERA of 5.57 for the Zacatecas Tuzos. A year later, at age 19-20, he went 10-12 with a 2.36 ERA for Jalisco, striking out 158 batters, the fourth-most in the league. He was also 10th in ERA. That effort enticed the San Francisco Giants and scout Gary Johnson to sign Barrios. Assigned to the Phoenix Giants in 1973, he went 2-1 with a 4.50 ERA in the Pacific Coast League and was released after less than a month in the organization, returning to Jalisco.

Prior to the 1974 season Barrios was traded by the Charros to the Chicago White Sox, with Manuel Lugo, as part of a deal for Rudy Hernandez. Barrios was assigned to the Knoxville Sox and posted a 9-5 record and a 3.92 ERA. He pitched 2 games with the ChiSox and got toasted for 6 runs in 2 innings. Returned to Mexico for the 1975 campaign, Francisco went 10-12 with a 2.70 ERA. He was also 2-0 for the Denver Bears. Although he did not finish among the league leaders as he had three years prior, the White Sox brought him back in 1976.

1981 was a very rocky year for Barrios. He was fighting drug addiction and alcoholism, got into a fight with fellow White Sox pitcher Steve Trout and was arrested for possession of cocaine and disorderly conduct. As a player, he was 1-3 with a 3.96 ERA. The White Sox released him, and he spent the winter with the Hermosillo Naranjeros of the Mexican Pacific League, winning MVP honors after a 7-3, 1.65 campaign. Rumors had him returning to Major League Baseball with the Milwaukee Brewers when he died of a heart attack at his parents home at age 28, after having lived the last couple years in trouble with the law and substance abuse, possibly ruining his chances of a brighter career.