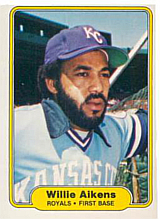 Slugger Willie Aikens belted 110 home runs in eight big league seasons. He had a World Series to remember in 1980, slugging four home runs for the Kansas City Royals as they came up short against the Philadelphia Phillies. Within five years, he washed out of the majors. Though he later starred in Mexico, his life was spiraling out of control after developing a fondness for drugs and partying, with his absolute nadir reached via a 1994 conviction and sentencing for crack cocaine distribution. Released in 2008, he got his life back on track and was welcomed back into the Royals organization as a coach.

Born "Willie Mays Aikens", he was actually named after an uncle Willie with Mays simply being the last name of his mother's family doctor. He grew up poor in South Carolina, navigating his way through tough circumstances via athletics. A three-sport star in high school, Willie attended South Carolina State on a baseball and football scholarship, only for the school to drop baseball following his freshman year. It was with a semipro ballclub in Baltimore that the California Angels found Willie, taking him in the January 1975 amateur draft. Within a year, he became a top power-hitting prospect in their farm system. In 1976, Aikens was Texas League Player of the Year, batting .317/.396/.554 with 30 homers, 99 runs scored and 117 RBI. After scorching the Pacific Coast League with the Salt Lake City Gulls (.336/.429/.569 in 77 games) in 1977, Willie got the call to the bigs.

His first big league look was rather uninspiring: a .198/.277/.242 line in 42 games. Back in the PCL for the entirety of 1978, Willie picked up where he left off with the Gulls, hitting .326/.419/.551 with a league-leading 29 home runs and a second-best tally of 110 RBI, just behind the marvelous bat of Pedro Guerrero. The next spring, 1979, Aikens made the club and rewarded them with a fine season: .280/.376/.493, 21 homers and 81 RBI. He split his time at designated hitter and first base and etched his name in the record books with a couple of bombs on consecutive days. Willie was the 8th man in history to hit grand slams in consecutive games, victimizing Dyar Miller and Phil Huffman in a pair of 10-2 Halo wins over the Toronto Blue Jays at Exhibition Stadium on June 23rd and 24th. The Angels won the first division title in their history that season, but Willie did not appear in the postseason. After the season, he and Rance Mulliniks were dealt to the Kansas City Royals for a package including the original "A.C", Al Cowens.

With Hal McRae firmly holding down DH, Aikens became a full-time first baseman in 1980 despite defensive shortcomings (he led the AL with 12 errors in his first season). At the plate, he was great, batting .278/.356/.433 with 20 homers, 70 runs scored and 98 RBI. After a homer-less ALCS in which the Royals swept the New York Yankees in three games, Willie became the first man in history to have multiple home run games (plural) in a single World Series. In Game 1 of the 1980 World Series, he took Bob Walk deep twice at The Vet then belted two bombs against Larry Christenson and Dickie Noles in Game 5 at Royals Stadium. But Willie's .400/.538/1.100 in 20 at bats was not enough to power K.C. to a title, as they lost the series in six games. Over the next three seasons, he remained a good hitter, posting an OPS+ of 115 or better each year; twice he topped 140 and, in 1981, was among the American League's top 10 in home runs and walks. In 1983, he hit .302/.373/.539 with 23 home runs and 72 RBI. It is here that things soured.

At the end of the 1983 season, Willie (along with teammates Jerry Martin and Willie Wilson, and former teammate Vida Blue) was arrested and convicted for trying to purchase cocaine. He was suspended by Major League Baseball and sentenced to three months in prison, during which he was traded to the Toronto Blue Jays. Reinstated in May, he was a shadow of his former self, posting an OPS+ of 83 and 85 and barely cracking the .200 mark in his two years up North in 1984 and 1985. In what turned out to be his final major league game (on April 27, 1985), he pinch hit in the top of the 9th inning for Tony Fernandez and smacked a game-tying two-run homer. He was sent down to Triple A shortly thereafter, making him one of the few players to homer in their final major league at bat. In the minors, Aikens did a fine job in the International League playing for the Syracuse Chiefs. He hit .311, second to Juan Bonilla, hit 16 homers, walked 67 times and led the league in OBP (.416) and slugging (.496).

Willie went to the Mexican League in 1986. His timing was wonderful, as that year the league's offensive levels exploded thanks to the use of the Commando ball; the league as a whole hit .308 and many single-season offensive records were set. Three other players topped .400 that year. Aikens, the DH for an Angeles de Puebla powerhouse that hit .347, led the league in hitting by establishing the highest single-season batting average on record (.454; the old league record was .438 by Jimmie Collins), hits (202), RBI (154, the league record; the top three marks in Mexican League history were all set in 1986)), OBP (.571) and total bases (384, a new record). He was second in the league with 38 doubles, 134 runs (the second-best mark in league history) and an .863 slugging percentage. His 46 homers tied Hector Espino's old record but were only third in the circuit as two players topped 50. Puebla won over 68% of their games and cruised through the postseason. Late in the year, Aikens got one more chance in a US-based league; he signed with the Tidewater Tides but went just 2-for-15 with 2 walks and no extra base hits. The rest of his career would be in Mexico.

In the winter of 1989, Aikens played for the Bradenton Explorers and St. Lucie Legends of the Senior Professional Baseball Association, hitting 12 homers (second best in the circuit) and batting .345. He also pitched one inning for St. Lucie and faced 4 batters, giving up 1 hit. In 1990, Aikens' Leon Braves won the title. He hit .358/.485/.589, his lowest Mexican League slugging yet - he was 9th in homers and 7th in average as league offensive levels were still fading a bit. He was 3rd in walks and second in RBI. At the age of 36, Aikens finished his baseball career in 1991 - with his fourth city in his 6 years in Mexico, he played for the Monterrey Industriales and hit .299/.431/.496. Aikens' .372 career batting average is tied for the league record among players with 2,000 or more at-bats (even with Alfred Pinkston; his .671 slugging is second to Nick Castaneda, the player who had edged him in runs and slugging in 1986. Aikens was a notoriously bad defensive player and spent most of his career at designated hitter, with some time at first base. Willie also played Winter Baseball in the Puerto Rican Winter League with the Santurce Crabbers. He primarily wore number 24 in the majors.

Three years after retiring, Aikens was in legal trouble once more for criminal behavior. He was convicted for selling crack to an undercover cop and for possessing a gun in plain sight in a drug transaction. On June 4, 2008, Aikens was released from federal prison in Jesup, GA after spending nearly 14 years behind bars. When Aikens was sentenced, the guidelines for sentences on crack cocaine convictions were much stricter than those for powdered cocaine because it was thought that crack defendants were more violent. In 2007, the guidelines were deemed cruel and unusual and were relaxed somewhat.

After his release, he moved back to Kansas City and made a number of public appearances at Royals events. On February 1, 2011, Aikens took another step towards full rehabilitation when the Royals hired him as a minor league hitting instructor and listed him as a special coach with the major league team. Unfortunately, he suffered another setback barely a week later, as his wife Sara was the victim of a stroke and was hospitalized as he was about to leave for Arizona to be at the Royals' minor league camp. He did become a coach for the AZL Royals in 2013, the Idaho Falls Chukars in 2014 and back with AZL from 2015-2019.